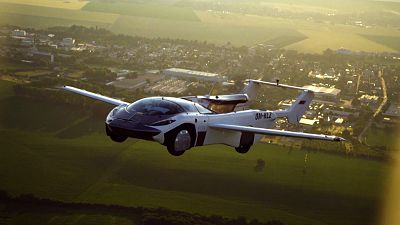 A flying car completed a manned flight this week in Slovakia in what its designers hope could be a step towards making it the transport of the future.

The AirCar, a hybrid car-aircraft created by Klein Vision, is still in the prototype stage but hit a new milestone with its test flight on Monday.

Piloted by the company's co-founder Stefan Klein, the car-aircraft flew took off from the airport in Nitra landing 35 minutes later at Bratislava International Airport.

Equipped with retractable wings, a 160HP BMW engine with a fixed-propeller, and a ballistic parachute, the unusual aircraft can convert from an aircraft to a car in under three minutes.

The dual-mode car-aircraft has already ticked off a list of achievements.

The AirCar has completed more than 40 hours of test flights, carried out steep 45 degree turns, been tested for stability and maneuverability, reached altitudes of 8,200 feet and zoomed through the air at a maximum cruising speed of 190 km/h.

"It's great that the legislation allowed something like this to go from a virtual location to the real one. This is our goal, to create a real product that you will be able to buy one day," says Klein.

But some experts think that the future is a long way off.

"We cannot say that in the coming years we will use flying (cars) here, but it is very good that this topic arises in Slovakia and there is a concrete result," said Lubomir Palcak from the Transport Research Institute in Zilina.

Klein Vision's next step is to build the pre-production model which it says will have a 300HP engine and receive the EASA CS-23 aircraft certification with an M1 road permit.

The company's Prototype 2 is expected to have a cruise speed of 300 km/h and range of 1,000 kilometres.