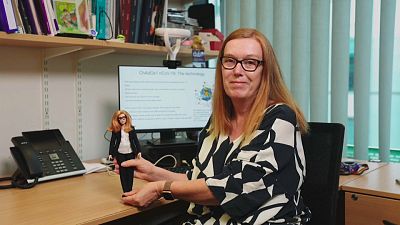 Professor Sarah Gilbert, who led the Oxford-AstraZeneca vaccine development, has been honoured a Barbie in her likeness.

The doll is meant to celebrate her achievement during the pandemic and inspire kids around the world to start a career in science or medicine.

The COVID-19 vaccine she helped create is the most widely used around the world and has protected hundreds of millions of people.

Even though Professor Gilbert is amused by the idea of having a Barbie made in her likeness, she hopes the doll will have a positive impact on kids and inspire them to become scientists themselves.

"It's a very strange concept to have a Barbie doll created in my likeness. I hope it will be part of making it more normal for girls to think about careers in science, although, to be honest, when I was a young girl I never believed that I wouldn't have a career in science," Dame Sarah Gilbert said.

The American toy company is also honouring five other women who have been pioneers during the global health crisis.

"I hope that my Barbie doll, as well as others of women who work in science and medicine, will just keep reminding them (children) that there are many careers open to them. So when they're playing, they are also thinking about what they might like to do in the future," Prof. Gilbert added.