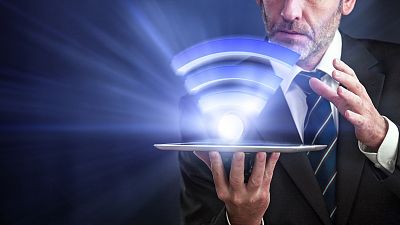 LiFi is reported to be less harmful that WiFi which uses radio frequencies.   -   Copyright  Canva
By Pascale Davies  •  Updated: 02/07/2021

Unlike radio frequencies that can be harmful to humans, Light Fidelity, or LiFi, is a wireless technology that uses light and LEDs. It works just like morse code, enabling fast internet access.

The technology, which usually uses a dongle rather than a router box, is still evolving and is already being used in hospitals, schools and even by the defence industry thanks to the health benefits, speed and extra level of security compared to WiFi.

But one French start-up has ditched the dongle that attaches to the ceiling and receives and converts light signals. Oledcomm has unveiled a tiny 1.5 x 3.5-millimetre chip that integrates directly into a phone, tablet or other devices.

The company, made up of about 20 employees, presented its new Gigabit OFE at the 2021 Mobile World Congress in Barcelona this week and is now waiting for the telco giants to bite.

"It's the first time in the world that this technology is going to be miniaturised," Benjamin Azoulay, Oledcomm’s president and CEO, told Euronews.

"It looks very small, but the smaller it is and the more expensive it is, the more difficult it is to do… it’s a real revolution," he said.

Odelcom is supplying some French schools with LiFi technology, which Azoulay says is his passion. Since France has passed a law to limit children being exposed to a high level of radio frequencies, the technology has become indispensable.

According to a 2016 report by ANSES, the French food, environmental and occupational health and safety agency, children can be more exposed to radio frequencies due to their morphological and anatomical features, in particular, their small size as well as the characteristics of some of their tissues.

"A high level of exposure to radio frequency can be dangerous," said Azoulay.

"Normally your installation at home is made in such a way that there is no danger. But with the proliferation of the Internet Of Things, connected objects, mobiles, WiFi boxes etc, we might reach a limit where the exposure is too high".

But the advantage of LiFi is that "it is 100 per cent guaranteed there will be no exposure to radio frequencies," he said.

The technology is also being used in hospitals as the radio frequencies transmitted by WiFi can interfere with medical equipment.

But LiFi has other advantages and uses. Unlike WiFi which can be easier to hack, LiFi is difficult to break into as the light is impossible to hack from outside the room in which you are using a device. It’s for this reason that the defence sector is also interested in using it, Azoulay added.

"Some Odelcomm colleagues announced that the US Army has started to adopt in a massive way the LiFi technology for defence applications and security applications," he said.

Aviation companies are also experimenting with the technology, as is the space industry because radio frequencies interfere with the equipment of spacecraft.

As such, France’s National Centre for Space Studies (CNES) has selected Oledcomm to make samples for the European Space Agency’s (ESA) launchers.

But can LiFi replace WiFi?

'This is a niche but it's a big niche'

For the moment, Oledcomm is working in the Business to Business market and is not available to the general public. While LiFi can provide a faster download speed of 100 Mbps, it can be more limited when it comes to range.

Azoulay also doesn’t see it as a competition between LiFi and WiFi.

"WiFi is very convenient. It works extremely well and it crosses the world. So, if you just have that in your home, you would have WiFi everywhere in your home.

"But LiFi will be a fantastic alternative everywhere that you don't want the radio frequencies for many reasons. This is a niche, but it's a big niche," he told Euronews Next.

Despite the field’s limited scope, Oledcomm is not the only company to offer LiFi. Philips Lighting - the company of which Azoulay was previously the director of for the France division - and Scottish company PureLiFi are just some of the leaders in the field in Europe.

Oledcomm is currently in talks with Orange and Vodafone to implement the new LiFi chip as well as a large Asian telco, though Azoulay declined to specify which company it is as it's too early to make a public announcement, he said.

He believes though that Europe will be a leader in the LiFi market and the new chip will be a key driver for the bloc, predicting it will make its way into phones and tablets in the next couple of years.

"This is a product that is made in Europe, made in France," he said.

"We are very proud to have a circuit of semiconductor building the European ecosystem".