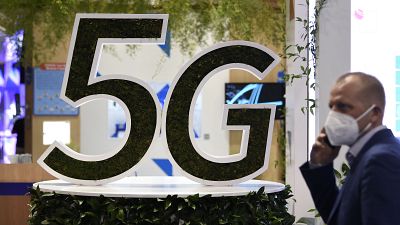 Policymakers working on the drive towards digitalisation are focused on improving connectivity through adoption of 5G - the next-generation mobile network technology.

The European Union's 2030 Digital Compass, a statement of intent for the coming decade, highlights 5G as a crucial element in the bloc's goal of achieving "digital leadership" by 2030.

Low latency and high bandwidth are qualities that proponents say will help 5G fuel growth in automation and data-rich initiatives like smart cities.

But a lot of the benefits are still theoretical. "5G is going to be fully available only when every single spectrum is licenced in every country, when we have availability of different devices, not only smartphones, but industrial routers, industrial devices and the Internet of Things," Juan Cambeiro, head of innovation projects at Spanish telco Telefónica, told Euronews Next.

"There is a lot of marketing material, meaning that we talk a lot about the milliseconds, about the gigabits, but we are not there in technology yet. So we're going to be there probably in two or three years' time", he said.

Telefónica's 5G network in Spain was switched on last year and the company claims around 80 per cent of Spanish households can now access the network.

While some European mobile operators are rapidly building their 5G networks, they're behind their counterparts in Asia and the United States.

Three of China's largest mobile carriers launched 5G in 2019, as did US network Verizon. South Korean carriers narrowly beat the American network to the punch, flipping the switch on 5G in April 2019.

"By 2025, I think two fifths of all Europeans will have a 5G signal. But obviously it feels like a little bit of an arms race and the Chinese and the Americans are definitely forging ahead," Alex Sinclair, CTO of industry lobby the GSMA, told Euronews Next at the Mobile World Congress 2021 conference in Barcelona.

Telefónica's Cambeiro played up the role of 5G in keeping European nations competitive.

"If you don't embrace 5G now, the companies that do will be ahead of you for sure. From a country perspective, that means that countries that take longer to adopt 5G are going to be lagging behind," he said.

Industry figures at the event in Barcelona were keen to push improved connectivity as a way of rebuilding the European economy post-pandemic.

"What [the pandemic] has done is accelerate the digitalisation of things like finance, education and health," Sinclair told Euronews Next.

"It's something we at the GSMA have been pushing for ten years. Necessity is the mother of invention, so now because they had to do it it's been proven to work".

For Cambeiro, Europe's slower rollout of 5G is tempered by the diversity of use cases among early adopters. Smart agriculture, wireless communications infrastructure and cameras able to remotely assess roads for maintenance are among the areas of European business where 5G has been implemented.

"Even when we might be in Europe a bit behind in the actual deployment of the networks, I believe we have a very, very impressive feedback from customers. I don't believe Europe is lagging behind in the investigation of the different use cases in collaboration with industry. I believe in Europe we're quite ahead," he said.