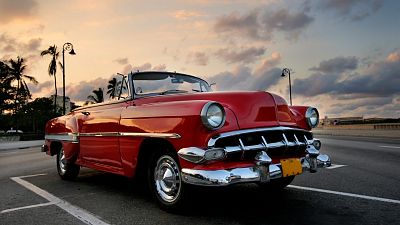 Classic cars are being converted to electric versions   -   Copyright  Getty via Canva
By Doloresz Katanich  •  Updated: 04/03/2021

Classic cars are being given a second environmentally-friendly chance by a company in the UK.

Lunaz retrofits classic Rolls Royce and Jaguar cars with electric parts, as well as installing modern features such as wifi, sat nav and audio systems. One charge of the battery allows for a journey of about 400km.

The multi-phased growth strategy will see Lunaz become a global leader in the conversion of passenger and industrial vehicles.

How did it all start?

"I saw Prince Harry leave the wedding in the electric E-Type with Meghan Markle. It just clicked what a fantastic idea it would be to have an aesthetically beautiful car, and have that with the reliability and sustainability element of being able to drive it every day."

He also wanted classic cars, prone to breaking down, to be more reliable. "[I have] a car that I got married in and I want to hand it down to my daughter when she's driving age. And the fact is, in 16 years when she's driving, she's not going to want to be driving a petrol car," says Lorenz.

He teamed up with John Hilton, who previously worked for Rolls Royce and the Renault Formula 1 team, to launch Lunaz. Working from the famous Silverstone race track, they re-build cars from the 'ground-up', aiming to preserve the feel of a classic car with the climate-friendly elements of an electric version.

"These are some of the most beautiful cars in history. And it gives you the chance to be able to use them with a guilt-free pleasure and conscience," he concludes.