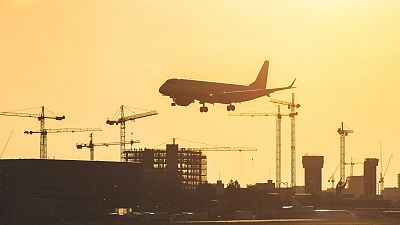 The airport - which is the British capital's smallest - changed over to a digital remote system earlier this year but only officially announced the switch on Friday.

The move was in part to facilitate a future expansion on the site which is built on former docklands next to London's financial district at Canary Wharf, airport bosses said.

Fourteen high-definition cameras have been installed on a 50 metre-high tower which capture all the comings and goings on the runway.

The video and audio are fed to a control room 70 miles away in Hampshire where the NATS (National Air Traffic Control Service) HQ is based.

The screens can be overlaid with extra data to help workers give correct instructions to aircraft.

"What we're able to do is augment the information that the air traffic controllers would have had in our traditional tower with more information, which is right in front of them. So that includes radar data, weather data, call sign of aircraft. So it just gives them much more information to operate more safely," Alison Fitzgerald, Chief Operating Officer at London City Airport, explained.

The high-tech remote system could be a target for cyber attacks, some experts have said, but there are ways to mitigate the risks.

"There is definitely always a risk with systems of this nature. For one thing, increasing complexity is a problem, where we move from something very simple, the kind of stereotype image of somebody leading out of a window with binoculars, to having cameras and monitors and remote connections," said Holly Williams, a cybersecurity expert.

"The increased complexity is a problem, but it can be handled in the way that we would handle building any kind of resilient system".

All the system's key components are replicated, so if one fails, there is a backup in place.

The multi-million-pound project has been introduced to make air traffic control safer and more efficient.

The technology was developed by Saab Digital Air Traffic Solutions in Sweden.