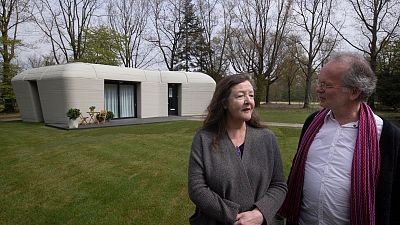 A Dutch couple will be the first people in Europe to live in a 3D printed house.

Elize Lutz ad Harrie Dekkers have applied to be tenants of a 3D printed house in Eindhoven, Netherlands. Their new home is a 94-square meter, two-bedroom bungalow resembling a boulder with windows. The walls were 3D printed at a nearby factory and were created in just 120 hours.

Lutz and Dekkers will rent the house for half a year paying 800 euros per month.

The home is the product of collaboration between city hall, Eindhoven's Technical University and construction companies called Project Milestone.

They are planning to build a total of five 3D-printed concrete houses and the next one will have more than one floor.

He figures houses can be 3D printed in the future using 30 per cent less materials.

The concept behind the two-bedroom concrete bungalow could be an innovative way to tackle a chronic housing shortage. In less than 10 years, The Netherlands needs to build hundreds of thousands of new homes to accommodate a growing population.