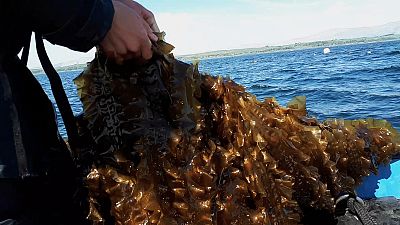 What if we used the sea to diversify the stock of available biofuels?

Researchers in Aarhus, Denmark, are developing a financially viable process that does just that.

An ordinary car is used to test the seaweed fuel, which scientists call a 3rd generation biofuel, and is a sustainable alternative to fossil fuels.

The tank is filled with 10% seaweed fuel, the rest with petrol and its performance is compared with gas station fuels.

"The emissions we measure are CO, CO2, and NOX. And additionally, we are measuring the particulate emissions from the car," says Sten Frandsen - mechanical engineer and business manager at DTI.

"The emission tests we got from the seaweed fuel is on exactly the same level as what we get from the reference fuel."

Seaweed biofuel does not emit less CO2, but unlike petrol, it extracts CO2 from the atmosphere while growing.

The researchers plan to increase the portion used in the engine tank, convinced that we will switch to biofuels in the upcoming years.

"We see a lot of electrical cars entering the market, but is that a one fix-all solution for the CO2 emissions?" asks Frandsen.

"Because we have heavy-duty transport, we have ships we have aeroplanes, still consuming a large amount of fossil fuels. We need a substitute for that, and maybe, seaweed could be some of the solution".

Why is seaweed sustainable? First, because it grows everywhere. It only needs the sun and the sea, which covers 70% of our planet.

Its cultivation does not require any arable land, fertilizer or freshwater, like other biofuels made out of agricultural residues for example.

But how can this new fuel be produced on an industrial scale? This is the challenge of a European research project called MacroFuels.

Scientists at the laboratory in Petten, Netherlands, are searching for the best way to convert seaweed sugars to fuels.

In some species, this can represent up to 60% of the plant.

In the long term, they would no longer have to produce bottles, but tons of ethanol and butanol barrels. Still following a rather basic process:

"First we take seaweed. And then we use water to get the sugars out with some enzymes or acids," says Jaap Van Hal, a chemist & innovation manager at biorefinery, TNO and macrofuel project scientific coordinator.

"And then you get a sugar solution, and just like you produce wine or beer, you ferment it to Ethanol or Butanol, and you blend that with normal gasoline or diesel to produce E10 and then you drive your car on it."

More biofuel production means more seaweed biomass. Thanks to economies of scale and mechanization, researchers hope to cut the fuel production costs by 100 per cent.

Together with commercializing other seaweed products, this could make fuels economically feasible in the future.

"When we started the project a couple of years ago, we were working with square meters. Today we are doing hectares, and in the near future, we will go in the square kilometre range," says Bert Groenendaal, a chemist & R&D project coordinator at SIOEN.

Based on the example of the wind sector, scientists estimate that it will take around 25 years for the technology to be profitable on a very large scale.

Could jellyfish be the answer to fighting ocean pollution?

Liquid windows and the energy-efficient buildings of tomorrow