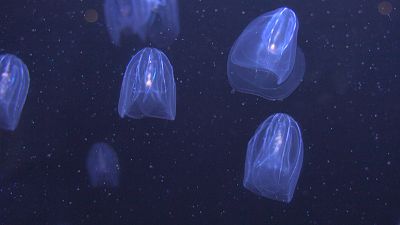 You can find huge quantities of jellyfish in European seas, but in some areas the number of blooms is problematic.

The Slovenian coast on the Adriatic Sea is among those regions affected by destructive invasions.

Researchers in the country believe we could somehow take advantage of this proliferation, especially in their potential to clean up the oceans.

Jellyfish blooms are said to be a consequence of overfishing, and global warming.

Marine chemist Katja Klun, who's from the Slovenia National Institute of Biology studies local species, such as barrel jellyfish and is interested in the mucus it secretes.

"The release of mucus is, of course, an indication of the stress. They want to protect themselves," she says.

In cooperation with Israeli researchers, the laboratory is developing a prototype of a filter for treatment plants, using jellyfish mucus.

Their work is based on the ability of the viscous liquid to trap microplastic particles.

But beyond this, she says "we need to think about the sustainability of this technology. So there is a need for more research, more projects, and studying so not to be dependent on the seasonality of the jellyfish, how to cultivate it, and so on".

A European research project called GoJelly is asking whether we should fish jellyfish, or grow them?

"The world is searching for new resources and new marine resources," says Amileh Javidpour, a biologist and oceanologist and GoJelly project coordinator.

"That is where the word blue growth is coming from. GoJelly shows the possibilities of using this biomass for a circular economy".

Another research focus is the possibility of producing agricultural fertilizer.

Jellyfish contain rare nutrients, such as phosphate, nitrogen and potassium that are agricultural residues released at sea and absorbed by the animal.

But scientists face many challenges, starting with conservation.

"If we choose to treat them fresh, we can not keep jellyfish for a long time. Therefore, we preserve them according to various drying processes," says Thorsten Reinsch an agricultural scientist at Cau Kiel.

"Other challenges are: How can I bring this dried material to the plant? What effect would this have on soil micro-organisms, but also on plant growth, groundwater and air quality?"

Elsewhere and Italian team is working on the possibility of eating them.

Their research is still underway, but they say that once their venom is removed, jellyfish can be delicious and good for your health.

"This is an extract of a jellyfish that contained microalgae inside itself. So in this product, there's both jellyfish and microalgae. It has strong anti-oxidant properties and we have demonstrated that it also has the ability to inhibit the growth of human cancer cells," says Antonella Leone, agricultural genetics, ISPA-CNR

Business opportunities or not, researchers stress the need for an environmentally friendly model.

Maritime traffic: The shift towards electrification

Could seaweed be the fuel of the future?

What is it about chicory roots that has scientists in spin?