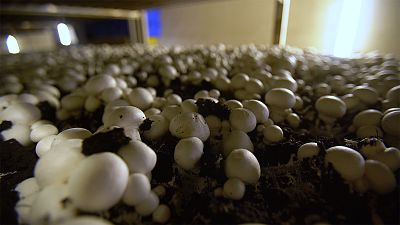 Mushrooms are big business. More than 1 million tonnes are grown in the European Union each year, producing a healthy, low-fat, high protein food that’s also rich in minerals and vitamins.

But there is a downside. Every tonne of mushrooms generates three tonnes of compost – a mixture of chicken litter, straw, gypsum and peat.

Getting rid of the compost has become a major logistic and economic challenge for the growers, one that is now the focus of a European research project - BioRescue.

It can cost up to 50 euros per tonne to dispose of. The aim of the scientists is to develop a sustainable bio-refinery to transform the organic waste into useful products.

Peter Corcoran, chief executive at Monaghan Biosciences, MBio, in Ireland, describes the compost as “an unloved gem” that is too good to be thrown away.

“At the moment, the compost is either disposed of in a form of landfill or indeed spread across agricultural land,” he told Euronews.

“Our desire is to use the compost and create much higher value applications that are incredibly useful for society.”

Until then, research into the compost is continuing in other European countries.

Spain’s National Renewable Energy Centre, CENER, in Pamplona is leading the research in a bid to transform the used mushroom compost into fertilisers and biodegradable nano-carriers for drugs.

The Spanish scientists have already successfully demonstrated that they can produce biopesticides.

“With biopesticides you attack specific species of diseases, whereas with traditional insecticides you eliminate a large part of the insects that are in the field."

The trial in the laboratory will be put into full-scale production in a bio-refinery. However, more research is needed before plants capable of producing bio-pesticides, nano-carriers and fertilisers can be built for mushroom growers.

"This is a way to produce products with an added value which is technically and economically viable and avoids having to take all this material to a landfill.”