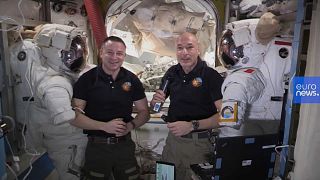 Euronews space correspondent and European Space Agency (ESA) astronaut Luca Parmitano has sent the latest instalment of Space Chronicles, a series in which he documents his experiences on the International Space Station (ISS) over a six-month period.

Parmitano was joined by NASA astronaut Andrew Morgan who talked about some of the experiments the crew have been working on.

Morgan and fellow astronaut Jessica Meir were working in the Life Sciences Glovebox recently. Meir tweeted about working on experiments studying the effects of microgravity on biological clocks.

She wrote that the research has "important implications for human health".

The astronauts also talked about working on repairing the Alpha Magnetic Spectrometer which detects particles.

They talked about a particularly complex extravehicular activity - also known as a spacewalk - in which they had "never done before activities like gripping and swaging tubes".