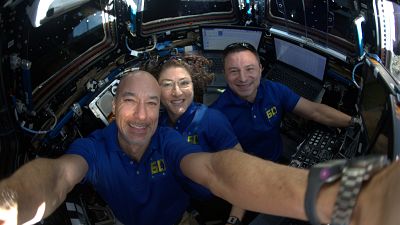 Euronews space correspondent and European Space Agency (ESA) astronaut Luca Parmitano has sent the latest instalment of Space Chronicles, a series in which he documents his experiences on the International Space Station (ISS) over a six-month period.

Since the 02 October, Parmitano became the commander of the space station.

"Even though this is my second mission, I can feel the level of responsibility that comes with the commandership, which is a role that I take very seriously," said Parmitano. "As I've always said from the very beginning when I was designated as commander for Expedition 61, my role up here is not to issue commands, but it is the role of a facilitator."

A busy few weeks in space

"We started preparing for a series of Extravehicular Activity (EVA) to change the old batteries, the old nickel-hydrogen batteries with new lithium-ion, more performing, better equipped to sustain the station for the next few years."

You can follow his time onboard the ISS exclusively on Euronews and Euronews.com.

Testing times for the human guinea pigs on ISS