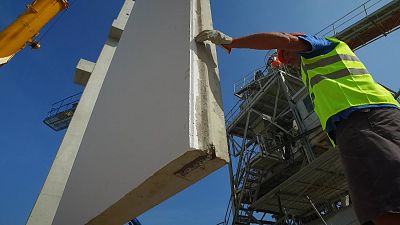 Chemical engineers, materials scientists and environmental experts are hard at work attempting to develop cement not only with better insulating properties, but that is also cheaper, more efficient, and environmentally friendly. How, and to what extent is that possible? Futuris visited a factory in Italy where the construction workers normally turn out 50,000 cubic metres of precast concrete every year, and are trying something new.

Workers here build complex prefabricated concrete products using traditional cement. This company is just one of many competing in a colossal market. The annual consumption of concrete is estimated at around 10 billion cubic meters worldwide. It is a highly competitive sector, that comes with a heavy environmental cost.

"Concrete is surely the most widely used man-made material every year on Earth. But it is also responsible for about 5 percent of worldwide carbon dioxide emissions. So finding a greener concrete made with a cement that has less environmental impact is not only good for nature, but also for this particular economic market", says the Rina Consulting/Ecobinder project co-ordinator and Chemical Engineer Arianna Amati.

Scientists at this European research project say they have come up with some solutions. They have replaced some minerals inside the cement used to produce concrete. They say the resulting concrete´ has a carbon footprint that is 30% lower.

"We need less limestone, which contains CO2, which is then burnt at the cement plant. This is one thing. A second reason is that the production of the clinkers is at lower temperatures, some 200ºC lower compared to ordinary Portland cement. And this saves energy and CO2. And also these binders have some unique properties like rapid strength increase which further reduces CO2 emissions", says Materials Scientist at HeidelbergCement AG, Jan Skoček.

Researchers used three experimental cements to build six test wall panels. Manufacturing each panel took 10 hours, instead of an average of 16 hours. And, scientists say, these panels show an increase of 25% in their insulating properties.

"This wall allows us to better reflect sunlight, so that inside you have cooler conditions in summer. Inside we have introduced a special porous material that also improves the wall's thermal properties", says Materials Scientist at LafargeHolcim, Blandine Albert.

More research is underway to assess the long-term durability, resilience and mechanical robustness of the panels. And for that, they have been installed at the factory itself.

If tests are conclusive and if manufacturing costs are indeed reduced by 15% as forecast by scientists, that would be good news for pre-cast concrete manufacturers.

"All this could mean better productivity, fewer manufacturing hours to produce the same products, less maintenance of our moulding machines, and so bigger economic advantages for our company." says Tesisystem Quality Manager Marco Nucci.

Pre-cast products developed at the project are intended for new construction as well as for the renovation of commercial buildings, say researchers.