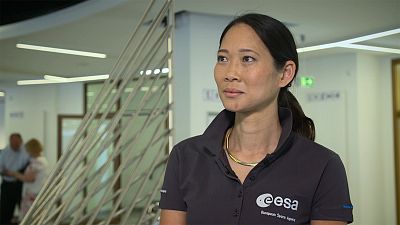 Viewer Stephen Panev would like to know if we are ever going to see a European astronaut on the Moon.

"You know, human space flight, space research, and space exploration in general are global endeavours," Ngo-Anh told Euronews. "All major space agencies are currently working to go beyond low Earth orbit, to go beyond the International Space Station, but I don’t know who will win the race. I expect that it will be a cooperation between several major space agencies but the nationality of who will actually set foot on the Moon or on Mars remains to be seen."

The future of the International Space Station (ISS)

We also had a question from @darameja who would like to know about the future of the ISS.

"We have just recently begun to make full use of all the International Space Station," Ngo-Anh said. "In the meantime, we are preparing for the next step. We would like to build a space station around the lunar orbit, the so called Deep Space Gateway, or Lunar Orbital Platform, and until we have the lunar orbital platform gateway in place we will continue to make use of the International Space Station for science, for research."

#AskSpace: When will humans reach Mars?