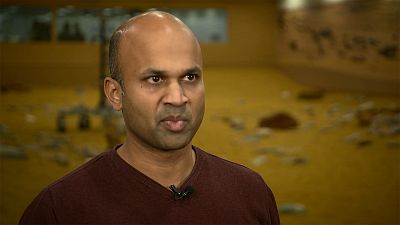 In this episode of #AskSpace we're joined by Manish Patel, a planetary scientists at The Open University and a member of the ExoMars team.

We had a question from viewer Shokrukh Yusupov, who wants to know when humans will reach Mars?

"We've been planning to go to Mars for a long time as humans. We've been there for many years now with robotic craft. I think the time is coming for us to go there with people," says Patel.

"That has come about primarily because of players like Space X. Commercial entities entering the market who are changing the way we launch, we way we get into space, and how we can get to Mars. So, I think within the next 20 years, or certainly within my lifetime we will be seeing people on Mars."

We also had questions from viewers Georg Forster and Eman Russ asking about how humans would actually live on Mars. Would they be in domes, or underground, and should they take oxygen with them?

"You would probably have a dome, or some kind of cabin that you would have to stay in, like on the space station, but on the surface of Mars," Patel replies.

"That would shield you from the harmful radiation, the low pressure, you'd have a breathable atmosphere."

"One of the key things you'll need on Mars is obviously oxygen. If you can tap the ice that we know is present on Mars, what we can do is: ice as you know is formed of hydrogen and oxygen, by separating that oxygen you can evolve that oxygen, which you can then harvest and use for breathing."

Send your questions using the #AskSpace hashtag and we'll try to answer them.

#AskSpace: Will there ever be a European astronaut on the moon?

#AskSpace: How will astronauts handle the journey to Mars?