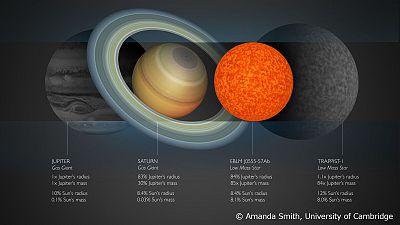 The smallest-ever star has been discovered, a mini version of our Sun about as big as the planet Saturn. Astronomers led by the University of Cambridge spotted the body while hunting for exoplanets, and are intrigued by its existence at the lowest limits of stardom.

Our discovery reveals how small stars can be.

The tiny twinkler is called EBLM J0555-57Ab, and is located about 600 light years away. It has just enough mass for the gravitational pressure inside it to enable the fusion of hydrogen nuclei into helium, the process that gives out light and heat, and defines a heavenly body as a star.

“It’s amazing to think that there can be stars as small as Jupiter or Saturn,” exoplanet scientist Amaury Triaud told Euronews.

The universe’s smallest known star is estimated at around 49,000 kilometres in radius, while the Sun is about 700,000 kilometres in radius. The reason it was discovered is that it is actually part of what’s known as a binary system, meaning it is twinned with a much larger star. It was only when the smaller star passed in front of the larger star as viewed from Earth that the scientists were able to detect it. This method is usually used to find exoplanets, as the light from the large star dims slightly as the planet passes in front of it, creating a partial eclipse.

Alexander Boetticher, lead author of the study and Master’s student at Cambridge’s Cavendish Laboratory and Institute of Astronomy., observed: “Had this star formed with only a slightly lower mass, the fusion reaction of hydrogen in its core could not be sustained, and the star would instead have transformed into a brown dwarf. ”

A brown dwarf is a kind of B-list celebrity in the stellar firmament, an often reddish object that doesn’t behave like a giant gas planet such as Jupiter but doesn’t have the mass to sustain fusion at its core and become a bone fide A-list star.

As with B-list celebs, there are an awful lot of these tiny stars populating our heavens, it’s just that they are hard to see because they are so dim (insert your own joke about B-list celebs here).

In fact, around half of the estimated 100 billion stars in the Milky Way are less than a quarter the size of our Sun.

Dim and small stars are interesting to scientists because they are good candidates for exoplanet hunting.
One of the key reasons is that a planet the size of Earth would cast only a very small shadow on the Sun, but a relatively larger one on a smaller star, making it easier to detect.

Exoplanets are a hot topic in astronomy, as scientists seek Earth-like worlds elsewhere in our galaxy. Earlier this year the discovery of seven planets in the so-called habitable zone around a star of a similar density but slightly larger size called Trappist-1 caused a huge stir, and much speculation about whether life was possible on these rocky worlds.

The tiny star EBLM J0555-57Ab was identified by a project called WASP, the world’s most successful ground-based exoplanet hunting project, with sites on the Canary Island of La Palma and Sutherland in South Africa.

The next step, according to Triaud, is to find out whether the Hubble Space Telescope is powerful enough to observe this starlet and teach us more about how it functions. If that is not possible then he told Euronews he believes the James Webb Space Telescope should be able to see it directly once it is launched at the end of next year.