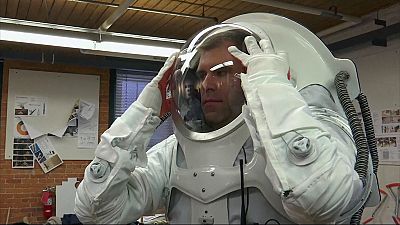 Which kind of space suit will an astronaut wear on Mars? In order to prepare for a future human mission on the red planet scientists are holding tests in order to figure out how to live in near-isolation.

Staff members and students at the Rhode Island School of Design are working on a new adjustable suit, which is expected to be tested during the next Mars simulation mission inside a dome in Hawaii.

“We’re designing this suit for use at HI-SEAS, which is a Mars analog – it’s a practice of what we’d eventually like to do on Mars. What the suit would do is to help the simulated astronauts there more realistically do their Extra Vehicular Activities, or EVAs,” explained Andrzej Stewart,
Simulated Mars Astronaut.

He was the chief engineering officer on the last Hawaii Space Exploration Analog and Simulation, a year-long simulation mission which ended in August.

Beyond the technical aspects of the spacesuit, he has also found out new important elements.

“One thing I noticed while wearing the suit today it’s also very isolating. So there’s a certain psychological aspect that comes from being isolated from the environment as well that’s important that we simulate,” he said.

Real space suits are designed to work in zero gravity, for this reason they are too heavy to use on an Earth environment, as the NASA-funded Mars simulation dome in Hawaii. Another issue with the real space suit is the extremely high cost.

“Even people inside of NASA can’t routinely get access to a real space suit sometimes. Real space suits are millions of dollars apiece. So we really were tying to create something that was affordable. This space suit that we’ve built is roughly $10,000 in materials and equipment,” pointed out Michael Lye, Simulated Mars Suit Designer.

The next simulated mission in scheduled on early 2017.