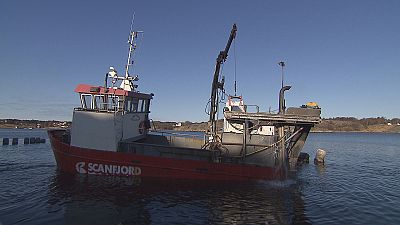 Mussel farming is one of Europe’s major shellfish industries, with total net production averaging around 500,000 tonnes per year, and with the potential for much, much more.

Despite the room for excess, some businesses have signed up to a European scheme designed to test new technologies, and methodologies, in a bid for both greater sustainability and profit.

Trawling the mussel farming process alongside producers, research scientists have identified how to minimise breakages and waste at every phase of production – all the way from the initial harvesting, right up to the fishmonger’s slab.

As biologist and project coordinator on the MusselsAlive project, Grethe Adoff, explained: “One of the major problems is the huge amount of waste – 20 to 30 percent of the mussel production is actually wasted in different parts of the production. The goal has been to reduce waste by 35 percent. We might not have reached that, but we’ve definitely seen advances in the production.”

The MusslesAlive project centres around the use of various different re-circulation systems, capable of storing mussels over a long period of time.

This agricultural revolution to industrial fishing’s hunter-gatherer method means farmers are less dependent on the whims of the weather, saving both energy and water.

Mads Dorenfeldt Jenssen, biologist at the National Institute of Technology in Norway, works first-hand with the new apparatus. He explained that “in a recirculation system you need very little new water in. So in this system, for instance, we pump about 12,000 litres per hour of water recirculate. But we only add 15 litres per hour.”

Given a normal flow-through system demands roughly 20 litres every hour per kilo of mussels, costs are also cut when chilling the water.

Another integral part of the process is a ‘Protein Skimmer’, which as Jenssen notes, guarantees water quality: “This helps remove any of the fine particle organic matter that comes out of the mussels. There is a pump at the bottom of this cylinder that creates millions and millions of micro bubbles and all the fat and protein in the water is brought up to create a foam. This foam is then showered and removed from the system, cleaning the water.”

The mussels next pass through a grading process designed to further their shelf-life. In addition biologists plant fake mussels on the production belt. Those fakes contain impact sensors able to record how and when the shells are affected.

The measurements are then used to adjust rotation speed, thus ensuring a much gentler handling process and subsequently, a much tastier mussel.

As far as research processes go, they could not have picked a more sumptuous sample to test for improvements.