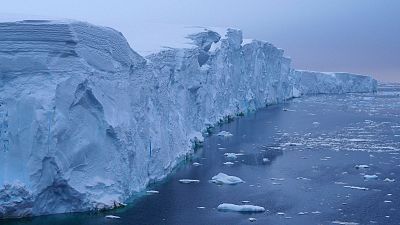 Scientists have warned there is going to be dramatic change in the front of the glacier.   -   Copyright  Rob Larter
By Lottie Limb  •  Updated: 21/12/2021

The front of Antarctica’s ‘riskiest’ glacier could shatter within the next five to 10 years, scientists have warned.

Thwaites glacier is gigantic, around the size of Great Britain, and has been nicknamed ‘doomsday’ because of the catastrophic effects its melting would trigger.

Presenting their data on 13 December, glaciologists showed that the warming ocean is eroding its eastern ice shelf from below, causing large cracks to appear in several places.

"I visualise it somewhat similar to that car window where you have a few cracks that are slowly propagating, and then suddenly you go over a bump in your car and the whole thing just starts to shatter in every direction," explains Dr Erin Pettit from Oregon State University.

The ominous South Pole activity comes as a new high temperature record is officially recognised in the Arctic.

Siberia hit 38C during the heatwave of summer 2020, “sound[ing] alarm bells about our changing climate”, the head of the World Meteorological Organisation (WMO) said.

What would happen if Thwaites Glacier’s ice shelf broke away?

The eastern ice shelf currently floats on the ocean surface. It is pinned to the rest of Thwaites by an underwater ridge.

Having analysed the satellite imagery from last month, and taken soundings on ice and by boat, scientists at the International Thwaites Glacier Collaboration (ITGC) have mapped out a number of different scenarios.

If the shelf doesn’t fragment into hundreds of icebergs first, it could become unmoored from the ridge (and therefore the sea floor) and set loose.

Although the loss of this eastern portion would represent a relatively small amount of Thwaites, it’s the knock-on effects that could be truly disastrous.

What we’re seeing already is enough to be worried about...Thwaites is a kind of monster.

However it turns out, scientists fear that an exposed Thwaites could lead to ice cliff collapse. The apocalyptic scenes of ice walls crumbling into the sea have yet to be seen in Antarctica, but once the process begins it could be self-perpetuating, explains Anna Crawford, a glaciologist at the University of St Andrews.

Though this spiralling sinkage is unlikely to happen for centuries, the present data is alarming enough.

Thwaites, which Crawford describes as “a kind of monster”, is already releasing 50 billion tonnes of ice into the ocean each year, accounting for around 4 per cent of global annual sea level rise.

If the glacier were to completely collapse, it would bring sea levels up by 65 cm - endangering millions of people on island nations and in coastal areas.

With cracks showing and warning signs from both ends of the planet, fast and radical action is needed to stall global warming.