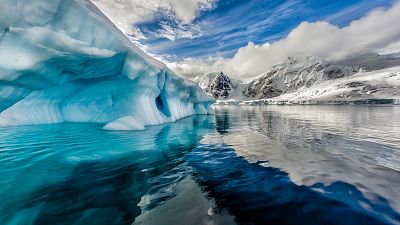 The looming ice shelves of Antarctica might look immovable, but they are slowly starting to shift due to rising global temperatures.

Scientists are concerned that mélange - the ice-and-snow mixture that holds ice shelves together - is starting to melt due to the increasing heat.

What is ice glue?

Mélange is a mixture of broken icebergs, windblown snow, and sea ice that surrounds ice shelves. This blend helps to hold ice shelves together, packing them tightly and attaching them to rocks and ridges.

But as temperatures above 20 degrees celsius were recorded for the first time last year, there are fears mélange is beginning to melt more rapidly, causing rifts and fractures in Antarctica’s ice shelves.

Researchers at NASA’s Jet Propulsion Laboratory and the University of California have been studying ice rifts to learn more about this process. Their work has shown that melting mélange may have caused an iceberg the size of Delaware to break away from the Larsen C ice shelf in the winter of 2017.

The importance of ice shelves in controlling sea levels cannot be underestimated.

According to the researchers, ice shelves act as roadblocks to the glaciers behind them, slowing their progress.

As they move slowly forward, ice shelves snag on undersea ridges or small islands, slowing down traffic. These snags can hold for thousands of years, but in recent decades due to rising temperatures and melting mélange, ice shelf movement has been much more rapid and cracks have been appearing more regularly.

These cracks turn into rifts and widen, until they eventually break away, releasing icebergs into the ocean. If, like Larsen B, the whole shelf breaks off, the glaciers behind will be released and flow into the sea, increasing sea levels.

How NASA is mapping the problem

The scientists involved in the study used computer programming to track possible temperature rises, and modelled the whole of the Larsen C ice shelf using observations from NASA’s Operation IceBridge and local satellites.

The team then chose 11 rifts for further in-depth analysis, picking the thinnest ones, which are most likely to break. Scientists discovered that the mélange was melting mainly due to contact with ocean water below, a process which can take place at any time of year.

Discovering that this process is happening from the bottom up, has helped experts understand why many ice shelves in the Antarctic break up decades before meltwater appears on their surfaces.

It shows us that Antarctica may be even more at risk from global warming than previously thought.