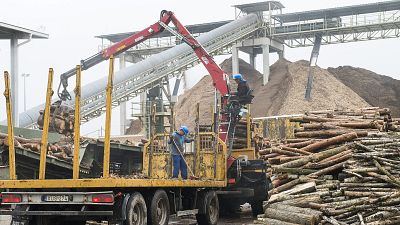 A network of over 100 NGOs is calling on the European Union to end the use of some biomass as renewable energy.

The Forest Defenders Alliance (FDA), an initiative to amplify the voices of NGOs in Europe and in countries with forests that are threatened by EU policies, wants Brussels to protect forests, rather than encourage more logging in order to produce biomass fuel that is burned in power plants.

The EU counts biomass fuel as a zero-carbon renewable energy, but environmentalists want it to be excluded from this criteria due to the fact that burning wood emits more carbon pollution than burning coal and regrowing trees, which NGOs say takes decades to centuries to offset the pollution.

The EU still doesn't have a clear position on the issue, which Finnish MEP Nils Torvalds explains as being because it is a booming industry.

"Well if you look at the different opinions and papers coming out the EU Parliament and the EU Commission, there is not a clear answer, and I think I know why there is not a clean, or a clear answer because if you look at a single tree when it’s burned then, of course, it’s CO2, but if you see what’s happening on a global scene, you see that biomass is growing fast," Torvalds told Euronews.

The FDA also wants to end subsidies for countries that encourage deforestation as part of the bloc's Renewable Energy Directive.

But with more than 70 per cent of their territories covered by forests, Finland and Sweden are leading the charge in Europe to keep the nearly €6 billion per year subsidy on biofuel production.

For Lina Burnelius, project leader & international coordinator at Protect the Forest Sweden, biomass energy should not be part of the solution to combatting climate change.

It's not hard - we need policies that create a Europe that looks beyond burning.

"Either the EU is ok with continuing down their prevailing line, and start irreversible chain-reactions beyond human control, or they will...do all in their power to decry emissions. It's not hard - we need policies that create a Europe that looks beyond burning."

NGOs have called on the EU institutions to discuss the issue during the Brussels Biomass Action Week in mid-November.