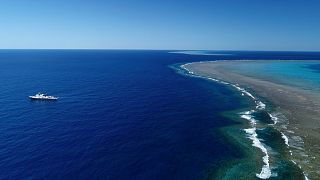 This is the first discovery of its kind in 120 years, Schmidt Ocean Institute announced today. The team found the reef while on board a research vessel on a 12-month exploration of the ocean surrounding Australia, which involved 3D mapping of the sea floor.

The reef was first spotted on 20th October by an underwater robot. Five days later a team of divers led by Dr. Robin Beaman, James Cook University, was sent down to have a better look. They discovered that the base of the reef was an impressive 1.5km wide. The dive was live-streamed, using high resolution footage, and broadcast on the Schmidt Ocean Institute’s website and Youtube Channel.

Dr. Beaman says that he was both “surprised and elated” by the finding.

“This unexpected discovery affirms that we continue to find unknown structures and new species in our Ocean,” states Wendy Schmidt, co-founder of Schmidt Ocean Institute. “The state of our knowledge about what’s in the Ocean has long been so limited. Thanks to new technologies that work as our eyes, ears and hands in the deep ocean, we have the capacity to explore like never before.

"New oceanscapes are opening to us, revealing the ecosystems and diverse life forms that share the planet with us.”

There are seven other detached reefs in the area, which have been mapped since the late 1800s. One of these is the Raine Island reef, which is the most important green sea turtle nesting area in the world.

The Great Barrier Reef is one of Australia’s most remarkable natural phenomenons. It contains an abundance of marine life and comprises over 3000 individual reef systems and coral cays. There are also hundreds of tropical islands within the area, famous for some of the world’s most beautiful golden beaches.

But the reef is in danger. Just earlier this month, a study surfaced stating that the Great Barrier Reef has lost more than half of its corals since 1995 due to warmer seas driven by climate change. This is why finding the new coral reef is so important.

“To find a new half-a-kilometer tall reef in the offshore Cape York area of the well-recognized Great Barrier Reef shows how mysterious the world is just beyond our coastline,” says Dr. Jyotika Virmani, executive director of Schmidt Ocean Institute.