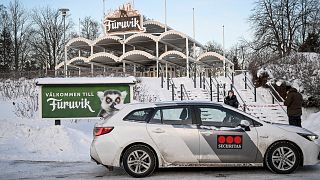 Three chimpanzees escaped from their enclosure in a central Sweden animal park and roamed the closed Furuvik zoo north of Stockholm.   -  Copyright  TT News Agency/Fredrik Sandberg via REUTERS
By Euronews  with AP  •  Updated: 16/12/2022

Four chimpanzees escaped from their enclosure in a Swedish zoo and are still loose inside a building. Three other chimps were shot dead and a fourth was injured after they got out on Wednesday.

"We had to euthanise three of our seven chimps today and it is extremely painful for us all," the zoo said in a post on Instagram.

"These are individuals we have taken care of, known and protected."

Furuvik zoo is located near Gavle, 165 kilometres north of Stockholm, and had seven chimpanzees. It is part of an amusement park.

According to the park's web page, it is also the only primate research station in the Nordic countries.

The one injured animal has not received veterinary attention as no one could safely get inside the building to administer it.

It was unclear how the mammals were able to escape from their enclosure but staff had still not managed to get them back inside on Thursday.

The zoo said that, after a "quiet" night, the four animals were thought to have returned to the chimpanzee house. They were working on getting a better idea of their location and coaxing them back inside the enclosure.

"We currently do not know exactly how it happened when the chimpanzees got out, but we take the incident very seriously and will conduct a full investigation and take all necessary measures to ensure that something like this cannot happen again," the zoo wrote in a statement on its Facebook page.

Why were the chimpanzees euthanised?

Officials from Furuvik zoo told the Swedish press that the animals had to be euthanised because there was not enough tranquillizer for all of them.

The zoo further addressed criticism over why it had not used sedatives instead of euthanising the animals in its Instagram post.

"To shoot with sedation darts you need to be very close to the animal," they said.

"This combined with the fact that it can take up to 10 minutes before the anaesthesia works, would pose a great danger to human safety."

Chimps can plan ahead for the future

One of the chimps thought to have died made headlines in 2009 after collecting rocks to throw at visitors. Santino shocked keepers at Furuvik and fascinated researchers because he was so prepared.

A subsequent study of the 31 year old chimp showed that he had started preparing the morning of the attack. Santino collected rocks and knocked out parts of concrete boulders inside of his enclosure. Interviews with caretakers at the zoo and other observations revealed that he had tapped on these boulders to identify weak points and broken up pieces that were too large to throw.

The chimp waited until midday when he launched his attack, throwing rocks at visitors. He didn't attack any of the other animals, just visitors viewing them from across the moat of their island enclosure.

The study showed that apes can plan ahead just like humans. According to their observations, researchers said it shows these animals can "consider the future in a very complex way."