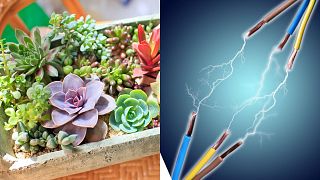 Can a plant generate electricity?

But could we one day harness plants - as well as wind and solar - to generate clean power?

It might seem like the stuff of sci-fi, but scientists have successfully used a succulent plant to create a living ‘bio-solar cell’ that runs on photosynthesis.

How does plant power work?

In all living cells, natural biochemical processes shuttle electrons - electrically charged particles found in all atoms - around and around.

This process happens in humans, bacteria, plants and fungi alike.

But in order to harness this energy, researchers have to work out how to ‘catch’ this current.

To do this, the American Chemistry Society used the power of photosynthesis.

Photosynthesis is the natural process by which plants convert sunlight into food.

“During [photosynthesis], light drives a flow of electrons from water that ultimately results in the generation of oxygen and sugar,” the American Chemistry Society statement reads.

“This means that living photosynthetic cells are constantly producing a flow of electrons that can be pulled away as a ‘photocurrent’ and used to power an external circuit, just like a solar cell.”

To ‘pull away’ the cells, the researchers inserted electricity conductors into the leaves of the succulent Corpuscularia lehmannii, also called the ‘ice plant’.

All plants contain water - but succulents are particularly water-dense, making them the ideal candidate for the experiment.

They found the voltage of the single leaf was 0.28V. For comparison, a standard car battery has an electrical potential of 12.6 volts.

Though this power is less than that of an alkaline battery, the researchers stress that connecting multiple leaves in series could increase the voltage.

Why else are plants important for the planet?

To combat climate change, we urgently need to decarbonise.

Between 2010 and 2019, average annual global greenhouse gas emissions were at their highest levels in human history, according to the UN Intergovernmental Panel on Climate Change's (IPCC) latest report in April.

Photosynthesis is already a planet-saving process. By absorbing carbon dioxide, plants act as a ‘carbon sink’, pulling emissions from the atmosphere.