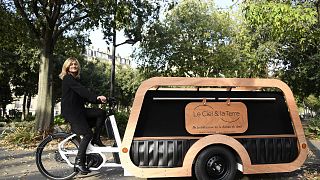 An unusual-looking cargo bike is attempting to shake up the funeral business in France.

The 'Corbicyclette', a mash-up of the French words for hearse and bicycle, is the brainchild of Isabelle Plumereau.

She runs a small funeral home called ‘The Sky and the Earth’ in Paris.

Her new cargo bike is designed to take full-sized coffins, in the place of traditional, motor-driven hearses.

"The Corbicyclette is to propose a new ritual for families that I accompany, especially at the cemetery," says Plumereau, adding it allows for "a slow, silent, quiet procession, to the rhythm of the steps of the people who walk behind and who make the procession."

"I am as attached to the form as to the substance," she continued. "For me, it is very important to accompany the families by giving them meaning in the ceremony, but also by giving them beauty. Because beauty is what will also bring comfort."

Similar 'Corbyiclettes' already exist in the United States and Denmark.

Her version is two metres long and has electric assistance, which enables it to tackle steeper roads. This cargo bike would be the first in France and its services should be available this autumn.

What is the environmental impact of burials and cremation?

Around 55.4 million people died in 2019, according to the World Health Organisation.

The mourning process is a crucial part of death, but it can also take an environmental toll.

The chemicals used for embalming a body are damaging to the environment and leak out into the soil when a person has been buried.

Cremation releases harmful gases like mercury and the process itself uses natural gas and takes around three hours. In the US CO2 emissions from cremations exceeded 360,000 metric tonnes in 2020.

Add in the materials used for coffins and the emissions of those travelling to a funeral and the environmental footprint of dying is not insignificant.

How can we make funerals more eco-friendly?

In the US a body-composting process called terramation has been legalised in certain states.

It uses organic reduction to convert bodies into soil.

Corpses are placed in airtight vessels and surrounded by a bulking mixture of alfalfa and sawdust.