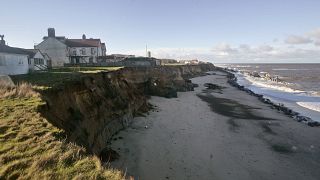 A view of the edge of northeastern coastal village of Happisburgh, in Norfolk, England.   -   Copyright  AP Photo/Lefteris Pitarakis
By Doloresz Katanich  with EBU  •  Updated: 10/03/2022

The English coastal town of Happisburgh is losing metres of land and entire homes to the sea every year. And climate change is to blame.

Half of Beach Road has already been swept away by the sea, meaning the road now stops in mid-air - a daily reminder that locals here are fighting a losing battle. Coastal erosion is taking metres of land from the town each year, including entire farmlands and roads.

After years of loss, locals now have to face the reality of losing the entire village.

"What we are facing is that the infrastructure, the historic infrastructure is now on the line," says Kerby. "We have got the lighthouse which is now just metres away. The church, the very fabric of our society, is now becoming an ever-increasing threat."

The 14th-century church and the oldest working lighthouse in East Anglia, along with some 600 homes could all be gone within 30 years, according to the latest predictions.

This stretch of the British east coast crumbles at an average rate of 1.7 metres per year. This makes it the fastest eroding coast in Europe. Erosion is not a new phenomenon here: the coast consists of soft materials such as sand, lime, and clay and has been retreating since the Middle Ages. But due to climate change, rising sea levels, and a higher frequency of severe storms, this process is speeding up.

Happisburgh is not the only place where this is happening. Great Britain is an island with a long coastline that can’t be protected at every point.

The British government has now decided to stop investing in the seawall off the coast of Happisburgh. The village is sparsely populated and the farmland and housing are not valuable enough to protect.

Watch the video above to see what is happening in the village.