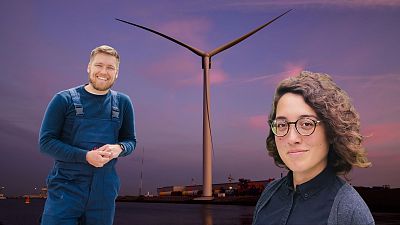 With 1.2 billion jobs directly reliant on a healthy, stable planet across the world, high-carbon industries are slowly fading out of the global economy.

As certain jobs become obsolete, those working in fossil fuel sectors are dropping like flies as the world wakes up to the climate crisis.

This week, government ministers in the UK outlined their strategy for achieving net-zero by 2050, which they say will create 440,000 new jobs in green industries by 2030.

Pete Mulholland is one of the many workers who jumped ship from a carbon-intensive industry to a more environmentally conscious career. He is a drilling veteran, having travelled all over the world for his previous job in oil and gas.

“Initially, it was just about going places and adventure. But after a while, you start to see that the planet has enough carbon spewing into it.”

His home of southwest France is known for its natural beauty - clear rivers flow through the chalky, limestone hillside and green forest lines the landscape. “When you look at the trees they are covered in lichen, you don’t see that in a polluted place,” says Pete.

His time is divided between Lot, in the Occitane region of France and Cornwall, UK, where he spends months at a time drilling geothermal wells.

“If I can do a geothermal job on rotation, it allows me to live the lifestyle I want while doing something I feel quite good about.”

I've got less money coming in, sure. But my life hasn't changed one bit.

Six months ago Pete transitioned to a lower carbon job, supervising geothermal exploration at the Eden Project. The team drills deep wells into hot rocks near the earth’s core. Cold water is then pumped down, running through the cracks in the rocks and is heated up. This returns to the surface as hot water and steam, used to power turbines that generate electricity.

The good news for the planet is that geothermal energy is renewable and no polluting gases are produced.

Geothermal exploration at the Eden Project is still in its infancy. Pete took a pay cut to start his new job there. “I've got less money coming in, sure. But my life hasn't changed one bit.”

These are the faces of the green transition.

Oil to geothermal: ‘My lifestyle changed, definitely for the better’

“I was keen to move to a greener job, it was on my conscience.”

He continues, “I knew I was actively contributing to hydrocarbon production. I don’t have anything against the oil and gas industry, it gave me a great education, I travelled all over the world, but I was going to make the move at some point in my career.”

This fresh-faced climate recruit now works with Pete drilling geothermal wells. The environmental impact of his job had been playing on his mind for some time.

The 2015 Paris agreement is probably where it started, he reflects, “ironically, that was when I was studying for a master's in petroleum engineering.”

I was keen to move to a greener job, it was on my conscience.

“The quickest way for me to change into a low carbon role was to leave, which is a real shame because I put five years into working on rigs,” says Robbie.

Pete’s breakup with the oil and gas industry has not been as clear-cut. In fact, he has flip-flopped between oil and geothermal projects three times over the course of his career. Jobs in geothermal are not easy to come by - currently, there are only a handful of British workers involved in the sector.

“Most of my colleagues who are in oil and gas are constantly begging me, ‘Do I know of somewhere that can get them a job and get their foot in the door?’ No convincing is needed. Getting started in geothermal is difficult because there are so few geothermal wells being drilled.”

From cars to wind: ‘I’m not an eco-warrior’

For many people, the green credentials of their job are far from a top priority. Research from Public First found that security and working conditions mattered more than environmental impact for some workers in the UK, with decent pay and adequate breaks being more important.

After spending over 11 years working for an automotive giant in the Northeast of England, Joe Colligan admits that environmental concerns were not at the forefront of his decision to change jobs.

“The automotive industry is in no-man’s land at the moment. Opportunities for growth and development were becoming few and far between.”

Joe was approached just two months ago to work at the world’s largest offshore wind farm. Dogger Bank, located 130km off the North East coast, began life in 2015 after it was given planning consent from the UK government. Once installation of the turbines is complete, the wind farm is expected to power six million homes.

Joe was approached just two months ago to work at the world’s largest offshore wind farm.

“The green decision was a big one but it’s a secondary factor as to why [I moved]. I’m not an eco-warrior,” he says.

Joe’s lifestyle has changed for the better now.

“Manufacturing is based on micromanagement: I wore the same uniform, had the same lunch break, had to be at work at the same time.”

Before moving into a lower-carbon job, Joe did attempt to make sustainable changes from within the car industry.

“Over the past few years I've stood up and started taking more notice: even when I was in the automotive inbound supply chain, I was always pushing for more environmentally green transport methods.”

He says he encouraged his employer to shift from using road to rail freight to move supplies from Europe. On an individual level, he would cycle to work and invested in a second-hand electric vehicle for rainier days. Although this was not without its challenges.

“We invented the electric car, but I had nowhere to plug mine in at work.”

Joe is keen to encourage others to transition. “Putting aside pressures from the likes of finance or family, jump in with two feet if that's where you want to go. I've got no regrets.”

‘Every job is a green job right?’

“We have to be honest: people want secure jobs with good conditions,” says Zoe Avison, a policy analyst at environmental think tank, Green Alliance. It estimates that improving peatland, woodland and urban parks could create over 16,000 jobs in 20 per cent of British constituencies experiencing the most severe employment difficulties.

“So, a job that's good and then is green on top of that, it's an extra bonus.”

Avison went through a transition of sorts herself, having previously worked as an analyst in the agricultural sector. Agriculture accounts for up to 12 per cent of total greenhouse gas emissions, according to the IPCC.

“It's definitely good and interesting to have worked in a sector that's going to be affected [by climate change].”

She suggests that providing appropriate training, getting clearer scope from government, and encouraging private investment are all necessary steps to transition to the green economy,

“Once we transition, every job is a green job, right? There's no high carbon jobs remaining.”

For those who have already made the leap, they can feel public perception shifting. “When you say that you work in an oil patch, people are looking at you with discontent,” says Pete. “When you say you're working in geothermal, they look at you with a level of respect.”

Robbie agrees, “One of the things I find most rewarding is that people are genuinely interested in what you do for work.” He has been approached by media on various occasions, not to mention the myriad of questions he receives at weddings - he adds.

“I took a big risk moving, but I’m so happy.” His smile shines once again, “I’m not the first, and hopefully I’m not the last.”

Views expressed by contributors are their own, not the views of their employer.