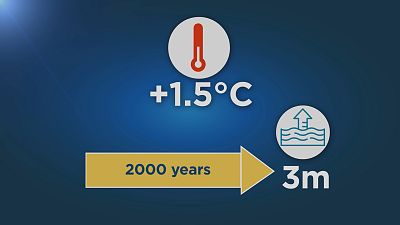 Climate change means that sea levels are rising worldwide, and no matter what is decided at the COP26 summit they will continue to rise far into the future.

Why will sea levels continue to rise?

There are two main explanations for why sea levels are rising now.

First, around 50 percent of sea level rise is because the water is warmer, so its volume increases.

About 42 percent is due to melting glaciers and ice sheets in places like the Alps, Greenland and Antarctica. Another eight percent is caused by changes in land water storage.

How fast are sea levels rising?

Globally, the sea level is currently rising at an average of around 4.4 millimetres per year - but that rate  is accelerating. In the short term, the big worry is how the sea level rise will amplify the extreme weather that is becoming more frequent because of climate change.

"We have to assume that sea levels will rise sharply and therefore storm surges will also be higher. At the same time, we have seen in the last few decades that heavy rain events have increased massively. We must also assume that these events will continue to increase until the end of the century. When there is a combination of flood events from the sea and inland areas, then catastrophe is inevitable," says Arne Arns, Professor of Coastal Engineering at the University of Rostock.

What does the future hold?

Longer term, there's another creeping inevitability which is very hard for us all to imagine. It's the fact that sea levels will keep rising for centuries, given that the ocean system takes a long time to adjust to our warmer planet.

So even if we manage to limit global warming to 1.5 degrees Celsius we'll still see sea levels rise by up to three metres over the next 2,000 years.