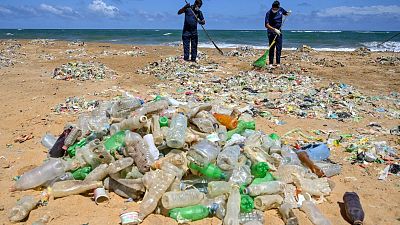 As of this week, straws, plastic bottles, coffee cups and takeaway containers made from certain materials are banned in the EU. Items made from expanded polystyrene, specifically, are no longer allowed to be sold.

The exact items included are 10 single-use plastics that are most commonly found thrown away on beaches.

Expanded polystyrene is being targeted because it easily breaks down into tiny white plastic balls which are blown around by the wind and eaten by fish or birds who think it’s food.

The new law, called the Single-Use Plastics (SUP) Directive, requires all 27 EU member states to enforce the new guidelines. Norway, despite not being a member of the EU, is also implementing the SUP directive as a member of the European Economic Area.

The laws state that the aim is to prevent and reduce the impact of certain plastic products on the environment, in particular the aquatic environment, and on human health, as well as to promote the transition to a circular economy with innovative and sustainable business models, products and materials.

The directive will be transposed into national law and applied as of 3 July 2021 - any countries who don't respect these obligations will be fined.

How were the new laws decided?

Single-use plastics (SUPs) make up 50 per cent of all litter found on European beaches. To plan the directive, the European Commission commissioned a study that used litter data from research projects, monitoring programmes and clean-ups on 276 European beaches in 17 EU countries. It found that half of all litter on these beaches in 2016 derived from SUP items.

The EU study also reported that around 90 per cent of all single-use plastics found on European beaches consist of just 10 different types of items. As a result, the EU decided to target these specific items in its SUP directive.

It bans the top 10 SUP items for which there is an accessible innovative alternative, no matter whether it is a reusable product or a single-use product made of another material other than plastic.

What makes an item single-use?

Single-use plastics (SUPs) are produced to be used once, from a few seconds to a few minutes. SUPs include items like food wrappers, take-away containers, coffee cups and plastic bottles. Because they are used for such a short time, SUPs are more likely to be littered.

“When we are on the go and we only need them for a few minutes, we often don't know what to do with those plastics,” says Gaëlle Haut, project manager for EU affairs at Rethink Plastic, an alliance of European NGOs fighting plastic pollution.

For other SUPs the EU did not consider environmentally-friendly alternatives advanced enough for a market restriction. Hence, not all single-use plastic cups, food and beverage containers will be banned, just those made of expanded polystyrene.

Rethink Plastic believes that enough alternatives are available to ban all kinds of SUP food and beverage containers.

Their decomposition takes a very long time during which the plastics impact marine life and, “they only decompose under very specific conditions which are not even found in nature, let alone in the ocean.”

For the top 10 SUP items for which alternatives are not as developed yet, the directive makes other requirements. To make consumers more aware of which products contain plastics and how to dispose of them correctly, period products, wet wipes, tobacco products and cups will need to have warning labels.

One of these is what Haut calls “a plague”, cigarette butts.

Every year, butts are the item most commonly found in beach cleans organised by Haut’s NGO Surfrider Foundation Europe. In the study the EU directive was based on, cigarette butts are the second most found SUP item.

Most cigarette filters include plastics and even though some plant-based alternatives exist, the EU calls for further innovation towards sustainable options.

Instead of banning them, the directive forces tobacco producers to help with the problem.

The measure is called Extended Producer Responsibility (EPR), and means producers will have to cover the costs for litter clean-up. This also applies to wet wipes and balloons.

However, only the market ban and the labeling requirements enter into force on 3 July. EPR and all the other measures addressing the items regarded as not fully replaceable yet will come within the next few years.

“There is no reason why citizens should already take responsibility for plastic pollution [now] and some industry players are guaranteed some more years,” says Haut.

The public approval towards the directive is expected to be high. In the 2017 Eurobarometer, which consists of around 1000 interviews per Member State, the vast majority of respondents said it was important that products should be designed in a way that plastic can be recycled (94 per cent approval).

Will all Member States meet the deadline of July 3rd?

The Member States have had two years to implement the measures of the directive in national law. Some have already done so early, for example France banned the first SUP items in the beginning of 2020. But not all countries have submitted a law draft to the Commission.

Rethink Plastic assessed how the Member States are doing in implementing the EU directive into national law. They found that four countries have not implemented the ban: Bulgaria, the Czech Republic, Poland and Romania. Many others have picked and chosen some of the measures, rather than going full hog.

While Haut says the directive is a big step in the right direction, she also thinks many more steps could be made and Rethink Plastics calls on all countries to be more ambitious than what the directive says.

Despite the ban, current SUPs in stock will still be up for sale in Europe to avoid masses of items being discarded without ever having been in use.

Maltese Olympian breaks world record to help save our oceans