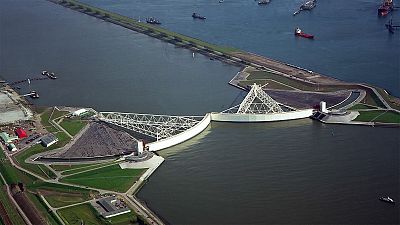 The Climate Now programme looked at the different ways the city of [Rotterdam](https:// www.rotterdaminnovationcity.com/) combats Climate Change and works with the environment.

It takes a look at how the city deals with the rise of sea levels at the port to stop the area from flooding, how a simple idea of a roof garden can become a Smart Roof helping to predict rainfalls and store rainwater, and how 35 cows living on a floating farm provide locals with their daily pint of fresh milk.

But first, let's have a look at the latest data from the [Copernicus Climate Change Service](https:// climate.copernicus.eu/).

It was warmer in much of Europe, the US and the Arctic, but it wasn't the case everywhere - Norway and Sweden, south-western Russia and the central Asian republics were cooler than usual.

Normally Arctic sea ice hits its lowest annual levels in September, and last month was no exception. In fact, September 2019 saw the third-lowest sea ice levels on record, shown by the blue line.

The line in red shows the historical average for the same time of year.

Meanwhile, the latest [Intergovernmental Panel on Climate Change](https:// www.ipcc.ch/) (IPCC) report says sea levels are currently rising at 3.6 millimetres per year, and that rise is accelerating as land-based ice masses melt and the oceans expand as they warm.

We have projections of sea-level rise of a metre or more by the end of the century, a climate change effect which directly threatens coastal cites around the world.

So, how can we adapt? Climate Now went to Rotterdam to see how the city is coping with the challenge of rising sea levels.

The [Maeslantkering](https:// www.keringhuis.nl/) in southern Holland is the world's biggest storm surge barrier. Twenty-two metres high, made from thick steel, it defends a huge part of the Netherlands against the sea. It's a formidable machine.

Jeroen Kramer, Communications Officer, Het Keringhuis said, "When a storm is coming in you get a storm surge. Water comes up higher and higher. If the water comes up higher than 3 metres, then it's going to be dangerous for [Rotterdam](https:// www.resilientrotterdam.nl/en/), that's the time the barrier closes."

"Nothing can happen, it's that solid and that strong," Kramer added.

The barrier helps protect the large areas of The Netherlands which are below sea level.

The gates have only had to close twice in 22 years to prevent flooding. However, with rising sea levels the barrier may need to close as often as once a year, and each day the barrier is closed costs [the port](https:// www.portofrotterdam.com/) 10 million euros in lost revenue.

The Dutch believe this barrier is good enough until at least mid-century. As the sea-level rise accelerates, you have to ask, are they ever afraid?

"It's not fear of the water," Kramer said, "It's calculating what water can do. We know what it can do. So there's a lot of respect for water. But we say, we are very proud to say Dutch people fight against water, but also work together with nature to make sure we do everything right in the future also."

So, to adapt, port authorities are building facilities on the coastal side that can operate in almost all climate conditions.

The delta city uses dykes and dams to keep the water at bay and is testing new ways to manage excess water, be it from the sea, groundwater, or rain.

Jorg Pieneman, Senior Advisor on Urban Water Management and Climate Adaptation, city of Rotterdam said, "Rotterdam is feeling the rise of the sea level. We build water storage capacity because every drop of rain which falls on the city has to be pumped out otherwise we have wet feet within the city."

Water storage capacity can take many forms, and one of the most innovative is a rooftop farm. Created six years ago, it can hold up to 60 litres of water per square metre, offers natural cooling and insulation, and a unique place to grow food.

The Dakakker project has received lots of politicians and delegations from around the world interested in the garden.

Emile Van Rinsum, Founder of the Dakakker Rooftop Farm and works for the Environmental Centre of Rotterdam said, "It's incredible that you can go up, in your own office in (to) a green space. So the first benefit is the nicest one, I think. The second one is water storage, because of course water storage is very important for the city, and the third one is that you can do something about the heat island effect."

The rooftop farm's remotely monitored electronically controlled Smart Roof monitors rain forecasts and will empty itself if a heavy downpour is expected. That way, the flows of rainwater can be better controlled.

Edible flowers, vegetables, garlic and small potatoes are grown, and there's also honey which is produced from a hive.

The soil depth varies from 5 to 50 centimetres and is made from small stone substrate enriched with animal manure.

The biggest issue was calculating whether the roof of the building could take the weight of the garden which is 1,000 square metres and is the largest in The Netherlands.

There are bigger ones in Brussels and Copenhagen and there is a 7,000 square metre garden built at the Porte de Versailles in Paris.

Another way to adapt is to explore new ideas of using open waterways. The Floating Farm has 35 dairy cows, with a total capacity for 40, which live on a floating platform on the dockside.

"Why not produce food on the water around and in the city," said Minke Van Wingerden, Partner of the Floating Farm, "because when you are on the water you are climate adaptive. You go up and down with the tide."

The cows eat grass from local soccer fields, potato peelings from restaurants, bran produced by a nearby windmill, and even beer production byproducts from a local brewery.

The floating farm collects and filters rainwater for the cows to drink and uses electricity from a floating solar power plant next to the farm.

The business is privately funded and generates revenue by selling its products, and also by selling tickets for guided tours of the facilities.

Several hundred litres of milk produced per day, (max 800 litres from 40 cows) are sold locally via restaurants, directly to customers, or via sustainable food distributors.

Local communities come along and share recipes and kitchen tips, particularly as the farm sells raw, unpasteurised milk on-site, which has made it a meeting point, and the owners have received delegations from all around the world as well.

Next, they plan to build floating platforms to raise chickens and grow fruit and vegetables.