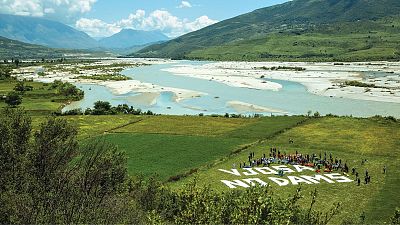 A campaign to save the most pristine river in Europe is underway, with backing from numerous brands and celebrities.

The turbulent history of the Balkans overshadows the fact that it is home to the last wild rivers in Europe. Together, they have enormous ecological value.

One of them, Albania’s Vjosa River is the largest wild river on the continent. From the mountains of Greece to the Adriatic Sea in Albania, it spans 300 kilometres full of unspoiled wilderness and is completely free of artificial barriers like hydropower dams.

These rivers and streams are home to more than 1,100 wildlife species, many of which are threatened.

For many families who have been living in the Vjosa Valley for thousands of years, they have an emotional relationship with the river. They want to keep it the way it is.

"According to an opinion poll that was conducted in December, 94 per cent of the Albanian people are in favour of a National Park," says EcoAlbania activist Besjana Guri.

Turning the land into a National Park would protect it from any exploitation.

The Vjosa River, its species, and the livelihoods that depend on them are under constant threat of destruction from dams. Watch Vjosa Forever with @Patagonia and sign the petition to ask the Albanian government to support #VjosaNationalParkNow: https://t.co/F8hojt3Xp2

Albanian political leaders say they intend to stop the dam projects and to establish a National Park instead. But activists fear these are empty words.

Celebrities like Leonardo DiCaprio, along with outdoor brand Patagonia, have been supporting Albanian and international nature conservation groups such as EcoAlbania, RiverWatch and EuroNatur launching a new campaign.

As part of the campaign, a short documentary called Vjosa Forever, created by Patagonia, asks concerned citizens everywhere to show their support for a Vjosa wild river National Park and bring international attention to the environmental disaster that could ensue if it remains unprotected.

The controversial part of this campaign is that hydropower is a form of renewable energy, meaning it won't pollute the air.

It's a clean energy method intended to contribute to the fight against the climate crisis. Compared to other renewable energy sources, hydropower has storage capacity and is considered more stable and reliable than traditional solar and wind energy.

But on the other hand, it is the only renewable energy source sending species to extinction, claims Patagonia.

91 per cent of hydropower projects in the Balkans produce little energy, yet have major impacts on the environment and people.

Click on the video above to learn more about Europe’s largest wild river.