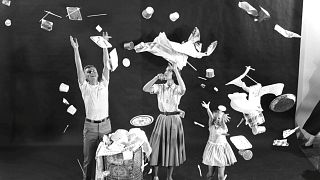 A new exhibition at the V&A Dundee in Scotland seeks to trace the complex history of plastic, from invention to ubiquity, exploring the material which was once thought to be a magical substance to the challenge of plastic pollution today as one of the world's most critical issues.

Through more than 300 objects, as well as graphics, architecture and fashion from the collections of the V&A and museums all over the world, the Plastic: Remaking Our World exhibition also questions what the future of the controversial material is.

"Looking at plastic through the lens of design allows visitors to understand more about its history and why, in a relatively short space of time, it transformed from wonder material to a problem affecting our entire planet," says Charlotte Hale, curator at V&A Dundee.

The emergence and rise of plastic

The first section of the exhibition named Syntheticalooks at the emergence of natural plastics, derived from plants and animals.

At the beginning of the twentieth century, the first fully synthetic plastic appeared – Bakelite - invented by Belgian-American chemist Leo Baekeland in 1907.

Bakelite was a hugely successful material: its hardness, strength, and fine finish meant that objects previously carved from wood or other hard materials could now be compression-moulded and mass-produced.

It was ideal for light switches, wall sockets or radio sets and played a central role in the electrification of everyday life.

Petromodernity, the exhibition's second section, shows how the rise of the petrochemical industry from the 1920s onward increased plastic production exponentially.

During the Second World War natural materials such as wool, silk and metals were increasingly scarce. The production of plastics became an integral element of the war effort, including nylon for parachutes and tyres and acrylic for cockpit canopies.

The Plasticene section looks at how the post-war plastics industry searched for new applications for wartime innovations with plastics finding their way into homes in the form of time-saving devices, easy-to-clean gadgets, and safe, colourful children’s toys.

Plastic represented unexplored frontiers and inspired designers with its virtually endless potential, which was expressed in futuristic forms and fresh interior design ideas.

Here visitors are also presented with examples of “the plastic paradox”, looking at how plastic is integral to contemporary life from global trade, digital infrastructures, and international travel to humanitarian aid and healthcare.

A life-saving incubator and other contributions from NHS Tayside's Ninewells Hospital highlight the importance of plastic in healthcare as well as the excess of single-use plastics in the industry.

Rethinking the future of plastic

As Leonie Bell, the director of V&A Dundee explains, “Plastic can be seen as one of the most successful designs of all time, shaping and saving our lives like no other material over its 150-year history."

"Yet, we are acutely aware of the environmental destruction and waste caused by the mass production and consumerism of plastic," she adds.

The final part of the exhibition, Re- explores contemporary approaches to rethinking the future of plastic and asks what role design can play in reducing, reusing, recycling and remaking.

Projects including The Ocean Clean Up, Everwave, and The Great Bubble Barrier show ways to filter plastic waste from rivers and oceans, but it also makes clear that effective reduction of plastic waste must start an earlier point.

Plastic: Remaking Our World is at the V&A Dundee until 5 February 2023.

Check out the video above for a look inside the exhibition

King James: The rise and rise of the NBA's all-time leading scorer