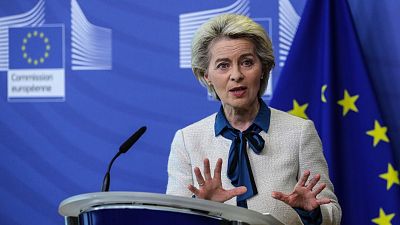 European Commission President Ursula von der Leyen delivers a press statement on the Commissions proposals regarding REPowerEU.   -   Copyright  Valeria Mongelli / Hans Lucas via Reuters Connect
The opinions expressed in this article are those of the author and do not represent in any way the editorial position of Euronews.
By Chloé Mikolajczak  •  Updated: 21/05/2022

Chloé Mikolajczak is the coordinator of the Fossil Free Politics campaign. Here she shares her thoughts on how the fossil gas industry’s undue influence on EU policy is preventing a much needed shift to cleaner forms of energy.

Before the war in Ukraine, Europe’s reliance on gas was already pushing tens of millions into energy poverty and burning through our chances of preventing climate breakdown. So why is the EU now prioritising replacing Russian gas instead of eliminating the need for it?

The answer lies in the power the gas industry holds in Brussels.

Last week, it was revealed how closely the European Commission’s response to the energy crisis has been shaped by big players in the fossil gas industry.

They agreed to set up an industry Task Force to determine which measures were “feasible.”

Once again they find themselves with a seat at the table, being asked for solutions to a crisis they helped cause.

In the coming weeks, a slate of fossil fuel companies is expected to join an EU-wide gas-buying platform. Its mandate includes helping identify new infrastructure to import gas – something that is both unnecessary and threatens a long-term gas lock-in.

These are the same corporations that have lobbied for years to keep gas at the heart of Europe’s energy mix. Once again they find themselves with a seat at the table, being asked for solutions to a crisis they helped cause.

It would be naïve to think that they are not using this position to secure long-term market access for the product which is bringing them record-breaking profits. Because this is exactly what they’ve done.

The EU cannot imagine a world without fossil gas, so its instinct is to seek advice and support from the companies that sell it rather than planning for a world without it. This is a symptom of a political imagination that has been forcibly constrained by the fossil gas industry’s insistence on its own survival above all else.

When you have a hammer, everything looks like a nail. In this case, all you have are hammers because the hammer industry has monopolised your toolbox, integrated itself into how decisions on tools supply are made and insisted that you keep buying ever-more eye-wateringly expensive hammers.

This isn’t a theoretical problem, it’s one which is having very real consequences. Analysis has shown that the most straightforward way to implement a phase-out of Russian gas is to boost clean energy investments beyond what the European Commission has proposed so far.

Not by spending more on new gas infrastructure.

The fossil gas industry is the group of bodies which own the drilling sites, the transport infrastructure, and the power plants, all operating together with a single voice. There is no effective counter-power to it. No other group of organisations – apart from perhaps the Russian state – is so central to keeping the lights on and heating Europe’s homes right now.

No other group of organisations – apart from perhaps the Russian state – is so central to keeping the lights on and heating Europe’s homes right now.

Is it any wonder then, that instead of taking this chance to confront the growing climate and cost of living crises by setting up an energy poverty task force, the Commission turns to fossil fuel CEOs?

The industry task force should be scrapped. If the Commission wants to hear from the fossil fuels industry it should set up a public hearing so we can all hear what they have to say, rather than keeping it behind closed doors.

Opening up our politics to policies which would lead us to a clean energy future means limiting the powerful voices pushing against it. We need to keep the fossil fuel industry out of climate and energy policy, in a similar way to how tobacco lobbyists are restricted in public health debates.

It means kicking fossil fuels out of our politics once and for all.