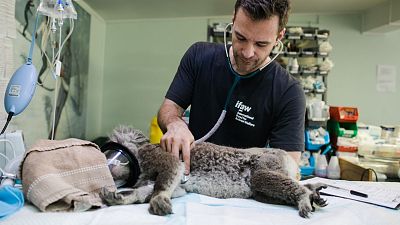 Koala sperm is being banked by scientists to ensure the survival of the species.   -   Copyright  Canva
By Maeve Campbell  •  Updated: 14/04/2022

Freezing koala sperm could be the best way to save the endangered species from becoming extinct, according to researchers in Australia.

Scientists at the University of Newcastle in New South Wales propose setting up a biolab of collected sperm, to improve genetic diversity in koalas.

The process is called biobanking and involves freezing sex cells and tissues for use in assisted breeding. The technology is similar to what doctors use to help (human) couples struggling to conceive.

Biobanking could “future-proof” the species, the new study explains, through capturing the genetics of key populations and long-dead individuals and re-introducing them into at-risk populations.

“These tools could make quite a big impact in captive breeding programmes by reducing rates of inbreeding and boosting genetic diversity,” Dr Lachlan Howell, Honorary Associate Lecturer at the University of Newcastle told ABC Australia.

The other advantage is the cost, he says.

Howell explains that conservationists don’t have the resources to keep captive breeding populations for that long, which is why freezing sperm could be a cost-effective solution for their survival.

"We've identified 16 wildlife hospitals and zoos across Australia that could act as nodes to collect koala sperm.”

The IUCN (The International Union for Conservation of Nature) lists the koala as 'potentially vulnerable'. This relatively low listing is influenced by the Australian state of Victoria's apparently stable official Koala conservation status.

But research conducted by the Australian Koala Foundation (AKF) strongly suggests that the species’ conservation status should be upgraded to ‘critically endangered’, especially in the South East Queensland bioregion.

The Queensland Minister for the Environment even declared koalas to be “functionally extinct” in 2019.

Koalas are in serious decline due to habitat destruction. They have been killed in their thousands as a result of bushfires in recent years.

But the animals also face threats from domestic dog attacks and road accidents. The Australian Koala Foundation estimates that there are less than 100,000 Koalas left in the wild, possibly as few as 43,000.

So freezing koala sperm could become a key part of a strategy to save the animals from extinction by 2050.