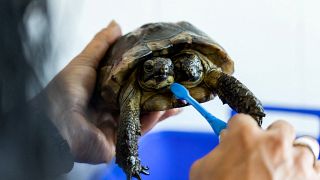 Janus was bathed and scrubbed ahead of his birthday celebrations   -   Copyright  PIERRE ALBOUY/REUTERS
By Hannah Brown  with Reuters  •  Updated: 19/09/2022

Meet Janus, the world’s oldest two-headed tortoise. He celebrated his 25th birthday (with a party and presents) this weekend in Geneva as he gained his world title.

Janus, named after the two-faced Roman God, has lived at the Geneva Natural History Museum since his birth.

In the wild, a two-headed tortoise would not ordinarily survive this long since it can’t retract its heads into its shell to shelter from predators.

One of his keepers, Angelica Bourgoin, credits their personalised care regime for his exceptionally long life.

To keep him in good health, Bourgoin and another carer feed him organic salad and give him daily massages and baths in green tea and chamomile. For exercise, he goes for regular walks, sometimes with music, and rides on a custom-made skateboard.

Bourgoin also said she puts music on every morning to help him wake up and talks to him regularly.

How does a two-headed animal control its body?

Janus has two heads, two hearts and two sets of lungs, but only one digestive system.

Janus has two distinct personalities with different moods and tastes that can occasionally lead to conflicts, for example over which direction to walk.

"What I've noticed is that the right head is more curious, more awake, it has a much stronger personality,” Bourgoin explains.

“The left head is more passive and very greedy," she says, adding that one head is partial to endives and the other to carrots.

Janus is under constant surveillance from his carers in case he flips over, which could be fatal. He previously suffered from a large bladder stone. Thankfully, it was removed in 2020 and he has since made a full recovery.

Watch the video above to see Janus in action.