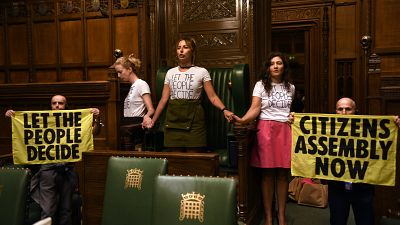 Climate activists glued themselves together around the Speaker's Chair in UK parliament   -   Copyright  XR Media Archive
By Rosie Frost  with AFP  •  Updated: 02/09/2022

Environmental protestors have glued themselves to the Speaker’s Chair inside the UK parliament to demand a citizens’ assembly on climate change.

Just before midday on 2 September, three members of Extinction Rebellion (XR), booked on a tour of the building, glued themselves in a chain around the chair, then took turns to read a speech.

Members of Parliament are still on their summer break so are not currently in session.

What did XR say in their speech in the UK parliament?

“We are in crisis. And what goes on in this chamber every day makes a joke out of us all. We can not afford to carry on like this,” they told the empty chamber.

“It is possible to act on climate and costs in a way that is fair and supports everyone. But our political system is too out of date and out of touch to see beyond the next election cycle and do what needs to be done.”

The trio went on to add that the UK needs a citizens’ assembly to empower ordinary people to make decisions that benefit everyone.

“It is possible to change things and update politics so it really represents ordinary people,” Alanna Byrne of Extinction Rebellion said in a statement.

What is a citizens’ assembly?

“Independent citizens’ assemblies can show that those blocking progress in Westminster have no democratic mandate to continue destroying the environment and give power back to people,” explains Byrne.

Selected like a jury and supported by independent expert knowledge, she added, this would be true democracy that reflects the diversity of the UK population.

Other members of the environmental group climbed scaffolding around Big Ben, holding a banner that read: “Let the people decide, citizens assembly now”.

Around 50 people were involved in the non-violent action at the Palace of Westminster.

Multiple police cars, incident response units, ambulances and fire engines were seen on the site as police surrounded the activists.

The Metropolitan police tweeted: "The Met is aware of a demonstration by a number protesters at the Palace of Westminster. Met police and parliamentary staff are responding."

Visitors are routinely checked by security guards before entering the building and concerns have been raised about how protesters were able to carry out the action.

“We are aware of an incident on the parliamentary estate and are currently dealing with the situation as a matter of urgency,” a spokesperson for the House of Commons said.

Does XR have further protests planned this September?

In a statement, XR said that this was the "opening act" for its September actions which are part of a plan to bring 100,000 people to the streets in civil resistance by next spring.

The group says that "politics as usual" will do anything to avoid the reality of the climate crisis and without large numbers of people turning up to protest, their demands will be ignored.

Planned protests also include a "massive disruptive action" in October alongside other groups focused on the cost of living crisis.

Extinction Rebellion activists sing as police try to escort them from the Palace of Westminster. 50+ people have taken action inside Parliament today with several superglued in the commons chamber. We are demanding a Citizens' Assembly to decide how we face these crises together. pic.twitter.com/sstD1col9x

With the UK set to get a new Prime Minister next week, XR says that the "scandal" of rising prices means millions won't be able to pay their bills this winter and faith in politics is at an all-time low. They also point to a recent Ipsos poll which found that 52 per cent of people think the government's plan to reach net zero by 2050 is too late.

A citizens' assembly on climate solutions has been one of XR's main demands since the group emerged in 2018.

The UK Climate Assembly was formed of 108 people in January 2020, proposing measures such as a frequent flier levy and a ban on the sale of petrol and diesel vehicles. In November 2021, the Westminister Foundation for Democracy said that, while it had been considered a success by some, the impact of this Climate Assembly had been limited.