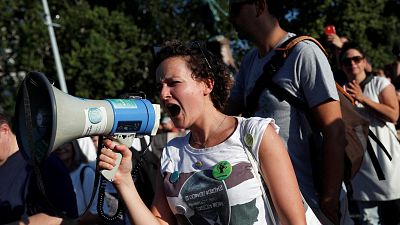 Protesters in Budapest amass for the second time in less than a week after logging regulations were loosened.   -   Copyright  REUTERS/Bernadett Szabo
By Jill Pole  with Reuters   •  Updated: 19/08/2022

Around a thousand Hungarians protested outside parliament for the second time in less than a week against an easing of logging rules to meet increased demand for firewood as a result of surging gas and electricity prices.

Prime Minister Viktor Orban's cabinet, citing the effects of the war in neighbouring Ukraine, loosened regulations on logging earlier this month. It is a move activists and opposition parties say could accelerate deforestation and harm the environment.

After last week's protest and after the WWF collected over 100,000 signatures in an online petition to reverse what it called a decree on "forest destruction," the Cabinet walked back some of the changes, exempting nature reserves from the regulations.

Some protesters who joined Wednesday's rally called by green activists said the response was merely an attempt by the government to defuse some of the tensions raised by the reforms.

"I think this is just a smokescreen. It is designed to calm nerves, but they have not given up on their genuine intentions concealed in this decree," Aniko Radl, a protester, said.

"If there is indeed an energy crisis, then we should probably adjust our consumption first."

Hungary is reliant on Russia for most of its energy and Orban has lobbied hard to secure an exemption from European Union sanctions on Russian crude oil imports, while banning the export of fuels, including firewood, from Hungary.

"This is our common future. We all feel the effects of the climate change on our skins and cutting down trees will only make it worse," said protester Fanni Fodor.

The rally was called by the green liberal LMP party, which has five opposition lawmakers in Hungary's 199-member parliament.

Why have logging regulations been loosened?

The government says Hungary can produce 3.5 million cubic metres of firewood per year and the loosening of rules was needed amid an increase in demand. It has been driven in part by Orban curbing his policy of subsidising household utility bills.

The government says logging would be ramped up only in case of a supply emergency. However, some environmental groups have already sounded the alarm.

"The loosening of regulations in the government decree is so substantial, which is on a par only with those implemented in the 20th century under even more critical circumstances," Laszlo Galhidy, a WWF Hungary official, said in a statement.

"Hungarian forests have yet to fully recover from those consequences."