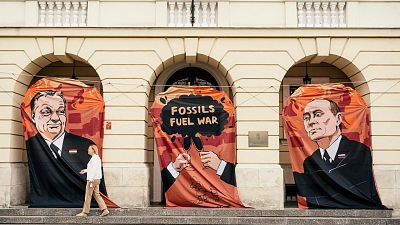 From Norway to Ukraine, Greenpeace and Ecoaction activists set up outside Hungarian embassies this week. They say that Orbán has been the biggest barrier to an embargo, calling the Hungarian government’s actions “morally unacceptable.”

Over the last month, the EU has been attempting to get its 27 member states to agree on the next major package of sanctions that would include a gradual embargo on Russian oil.

The bloc has struggled to convince Slovakia, Czech Republic and Hungary, countries which are heavily dependent on Russia’s fossil fuels.

Hungary has been the most vocal country to oppose the embargo. Its foreign minister, Peter Szijjarto, stated at a press conference on Wednesday (25 May) that the central European nation would not vote in favour “as long as it makes Hungary’s energy supply impossible.”

It comes after Orbán ruled out any discussion of the proposed oil embargo at next week’s summit of leaders. On Tuesday, he wrote to European Council president Charles Michel saying that he could not support the action.

Hungary’s Prime Minister wants more details about how the EU plans to provide finance for the country to wean itself off of Russian oil. He says that the recently announced RePowerEU plan - which sets out proposals for ditching Russian fossil fuels by 2027 - fails to address the concerns of landlocked states like Hungary.

“Discussing the sanctions package at the level of leaders in the absence of a consensus would be counterproductive,” Orbán wrote.

“It would only highlight our internal divisions without offering a realistic chance to resolve differences.”

This means that an agreement on oil sanctions may not be reached at the upcoming EU summit.

How would an embargo on Russian oil help Ukraine?

According to Greenpeace, the EU is spending around €1 billion a day on Russian fossil fuels, essentially financing the Russian aggression in Ukraine.

Putin’s former chief economic advisor Dr Andrei Illarionov has said that Russian attacks on Ukraine could stop “within a month or two” if Western nations stopped buying the country’s oil and gas.

“It's one of the very effective instruments still in the possession of the Western countries,” he told the BBC.

Greenpeace is calling on governments to cut European reliance on fossil fuels as quickly as possible and instead invest in the transition to sustainable energy.

“We believe that governments need to do everything in their power to stop this war that takes innocent lives in Ukraine every minute,” says Eszter Matya, gas campaigner at Greenpeace Central and Eastern Europe.

“Cutting Europe’s dependency on Russian oil and gas is also a good first step towards a fully fossil fuel-free future. Only then can we hope to limit the damage of the escalating climate and nature crisis.”