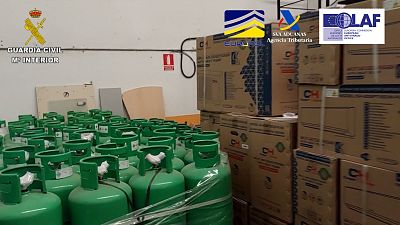 Spanish authorities say they have broken up an organised crime group involved in millions of carbon tax fraud.

The police say the gang operated by avoiding paying import and carbon taxes on transit goods through the country.

How does carbon tax fraud work?

European businesses can transit goods imported from countries outside the EU, through EU territory, without paying customs duties.

The criminal organisation took advantage of the EU goods transit rule to get out of paying import duty and carbon taxes.

The group illegally trafficked millions of euros worth of refrigerated greenhouse gases by bringing them in from China at the Spanish port of Valencia.

The gang claimed to be sending them on to other non-EU destinations like Jordan. This made them exempt from import taxes and the European market’s carbon emissions tariff.

They also avoided the fee levied by Spanish authorities on greenhouse gas refrigerants.

The group then kept the refrigerated gases in Spain instead, selling them on the black market around the country at prices three times less than on the normal market.

Police say the organisation established a ghost company in Portugal that appeared to receive their goods - should they be subjected to customs inspections.

The police also confiscated 110 tonnes of various types of gas valued at €11 million.

The Spanish treasury calculated the fraud to have scammed the taxpayer out of approximately €3.5 million in tax revenue.

The gang was also evading a tax that aims to discourage the use of fossil fuels.

Greenhouse gas refrigerants are extremely harmful to the environment as they have a high global warming potential. They are much more damaging than carbon dioxide.