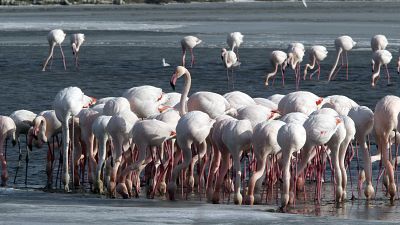 Climate change and rising sea levels are threatening the fragile eco-system of France's Camargue, one of Europe's largest wetlands and host to an extraordinary wildlife and vegetation variety.

Located in Southern France and spread over 930 square kilometres, the UNESCO World Heritage site is a natural wildlife paradise.

Hundreds of thousands of migrating birds flock here during the year, including the region's renowned pink flamingoes, perhaps the Camargue's most famous residents.

According to experts, the pink flamingoes might be one of the few survivors that will continue to come to the natural reserve despite the heavy erosion and rising sea levels it will suffer in the coming decades due to climate change.

"For flamingoes, global warming does not change much, flamingoes are nomadic birds, they move at any time of the year," says ornithologist Chloe Romieux-Zerdoun.

But human residents are already seeing the effects of climate change and rising sea levels.

"Since three or four decades, the beaches have decreased, the rocks arrive, the sand decreases. For example, we have a few days, two or three days of snow every year, when before we were never used to seeing it," said Helene Ferullo, resident of Les Saintes-Maries-de-la-Mer.

The Camargue is also famous for its natural salt production drawn from its one-of-a-kind pink lakes that comes from the high concentration of salt in the water, giving it its colour.

The salt is harvested and stashed in tall white and grey mountains. The region produces around 500,000 tons of salt per year.

However, the rise in sea levels will cause irreversible changes in the Camargue ecosystem, with high tides altering salt production, as well as the properties of the famous Camargue rice, unique for its red colour and natural nutty flavour, and also the amount of grass in the meadows.

Aurelie Raynaud, whose family breeds the Camargue's semi-wild bulls famous for their black fur and oversized horns, says the effects of climate change are already noticeable.

"Our breeding of Camargue bulls has been based here since 1950 and we are seeing many effects of the advancing of the sea and of the salinity of the soil. As the soil becomes saltier, the grass grows less, so we lose the quality of our grazing land and we have to give much more hay," Raynaud reveals.

"Financially as well it is more difficult. The sea advances, the coastal line does too, and it provokes tidal waves which leave a lot of salt during winters - and then we know that at the next spring we will have less grass again," she says.

Ocean levels are going up and up, and artificial barriers currently protecting the coast will not be able to withstand it, threatening to endanger the shoreline and local towns.

According to coastal geomorphology professor Francois Sabatier, man-made barriers currently in place to protect the shorelines will be unable to counter the effects of large storms.

"If today the waves during storms are close to more or less two metres of elevation, at the end of the century they will be around three metres. So it means that the medium storms today are going to be strongest at the end of this century," he adds.

Scientists at the European Union's Joint Research Centre in Italy, say that half of the world's sandy beaches could disappear by the end of the century if climate change continues unchecked.

The study's authors calculated that up to 40% of shoreline retreat could be prevented by reducing the greenhouse gas emissions that are driving climate change, but said that large and growing populations living along the coast will also need to be protected through other measures.