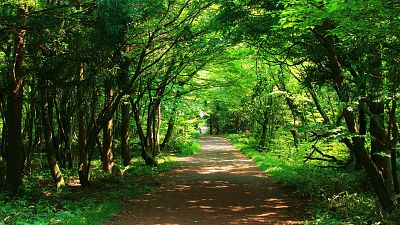 A potentially deadly tree disease has been discovered in a forest in Cornwall, UK.

It is the first time the disease has been spotted within Europe and this has sparked concern among forest conservation groups. The disease can cause needle dropping, and lead to the death of branches and roots.

Although the pathogen can be found across multiple species, the potential introduction of a new tree disease once again shows the danger of monocultures - especially in reforestation efforts.

What’s the disease doing in Cornwall?

Until now, it has only ever been found on the west coast of America and in New Zealand.

But the first discovery of the disease in Europe came after a routine plant health check by the Forestry Commission, reports Cornwall Live.

Restrictions are being placed on an area between the towns of Bodmin and Liskeard in Cornwall to curb its spread.

“I urge all sectors to support efforts to tackle this pathogen by checking the health of western hemlock and Douglas fir trees,” said Nicola Spence, the UK chief plant health officer.

“Key symptoms to look for are lesions on the stem, branch or roots. Any sightings should be reported to the Forestry Commission via its Tree Alert online portal.”

The fight against monocultures

There is a growing movement fighting against the prevalence of monocultures in reforestation efforts.

Crop areas with just a single species lead to a heightened risk of diseases ravaging through entire areas.

International Day Against Monoculture Tree Plantations is on 21 September. The event demands people recognise that the replacement of a crop area with just one species of plant does not meaningfully benefit the environment.

Reforest’Action, an activist movement for global reforestation, notes that movements such as the Bonn Challenge still allowed for monocultures in 45 per cent of the commitments.

“Creating a wooded field with nothing but eucalyptus planted cannot be called reforestation. For us, reforestation, in the only meaning that is worthwhile and serves all climate, biodiversity and socio-economic objectives, results in a diversity of tree species being planted or regenerated,” Stéphane Hallaire, President of Reforest’Action said.