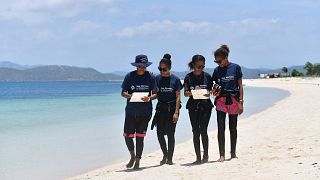 A group of Indigenous women is being trained to safeguard coral reefs under threat from climate change.

"The Sea Women of Melanesia is a team of women from Melanesia, who are passionate about marine conservation and who are willing to go back to their community to set up marine reserves, " says one of the team leaders Naomi Longa.

Since 2017, the NGO has been working hand in hand with local communities on marine conservation in the Solomon Islands and in Papua New Guinea. The programme recently won the UNEP's Champions of the Earth prize in the Inspiration and Action category.

The idea came about when Coral Sea Foundation founder Dr Andy Lewis stayed in an isolated Indigenous community while carrying out research. A local woman became interested in his work and asked Dr Lewis if he could start a programme that would empower women to do marine conservation work.

"She just finished grade 12, she had no university degree, no knowledge about science, but she was passionate about marine conservation, " says Evangelista Apelis, director of Sea Women of Melanesia.

A few years later Coral Sea Foundation set up the initiative Sea Women of Melanesia which has over 40 members today and protects 43 marine areas.

"In those communities that we target, the only source of livelihood is the sea," says Apelis.

Over 25 per cent of all marine species live in coral reefs and they also provide coastal protection from waves, storms, and floods. But in the last 70 years, half of the world’s reefs have been lost and 90 per cent are likely to disappear by 2050 due to climate change.

Sea Women of Melanesia trains local women in essential skills including marine science, snorkelling and underwater photography. They then help monitor and assess the impacts of widespread coral bleaching on some of the world's most endangered reefs.

And local communities have their knowledge to share too which, when combined with the science, helps protect the reefs.

"Most of the women have no background in science, they have their local way of dealing with conservation, " says Apelis.

"They take ownership of the sea. So we just go in, and we learn from them, and also impart the scientific knowledge to them."

A post shared by Sea Women of Melanesia (@seawomenofmelanesia)

Why are local women being trained?

The marine conservation training programme doesn't exclude men if they wish to join but the organisers firmly believe that involving women comes with more benefit for the conservation work.

"We believe and we've actually seen results showing that women tend to be more accountable, they tend to produce results. Also, they tend to bring their kids.

"So that's the kind of approach that we take in order to involve the community as a whole. And it also gives women a platform to exercise their leadership roles."

Watch the video above to see how the programme works.