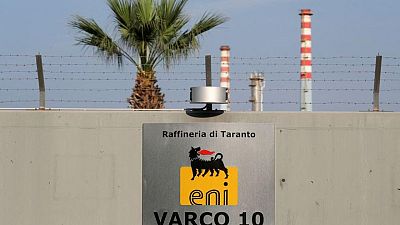 Eni made the pledge as it set out its strategy to 2025, promising investors better returns and vowing to pick up the pace on its climate ambition to be carbon neutral by 2050.

The European Union, which relies on Russia for 40% of its gas and 27% of its oil, has proposed plans to replace nearly two-thirds of Russian gas imports this year and aims to phase out dependence on all Russian fossil fuels by 2027.

Eni could provide more than 14 trillion cubic feet (tcf) of additional gas resources in the short to medium term, it said, including from Algeria, which has a pipeline to Italy, and Egypt, where Eni is also active.

Eni could supply 15 million tonnes per year of liquefied natural gas (LNG) by 2025, based on boosting production from Congo, Angola, Egypt, Indonesia, Nigeria and Mozambique.

Eni is Africa’s biggest foreign oil and gas producer, has expanded rapidly in the Gulf and is looking to grow in Asia.

“We are increasing our gas production and will send to Italy and southern Europe all the gas we have found,” Descalzi said.

But Eni said producing more gas would not mean abandoning the firm’s climate goals. Like its peers, Eni is overhauling its oil and gas businesses and shifting to renewables and low-carbon energy which will form the backbone of the company in future.

Plans to list Plenitude, Eni’s renewable energy and retail business, were going ahead despite the Ukraine crisis and a registration document for the process had been filed, it said.

The company plans to create a sustainable mobility business combining biofuels and fuel stations, Descalzi said, adding that it was too soon to say if that could be listed.

Eni is spinning off assets to help fund its renewables and low-carbon business. It expects to raise 3 billion euros ($3.3 billion) from such portfolio management moves to 2025.

Alongside plans for a 1.1 billion euro share buyback that could increase if Brent oil stays above $90 a barrel, the group nudged up its annual dividend to 0.88 euro per share from 0.86 euro.

“The update … fell short of our expectations due to a lower than expected increase in shareholder remuneration and lower upstream production growth,” broker Jefferies said.

Eni said its oil and gas output would grow by an average of 3% a year over the next four years, down from 4% in its previous plan.

Eni shares closed down 2.9% while the European oil and gas index was down 0.7%.