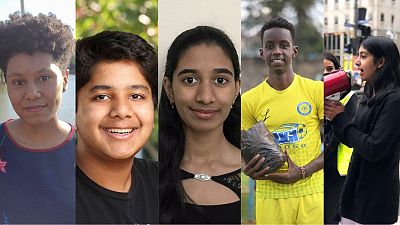 There are so many ways to bring your unique skills to bear on the climate and environmental crises facing us.

From using AI to fight deforestation, to turning football goals into trees, five talented teenagers are showing us there’s no limit to how we can re-create the world.

The finalists of the Children’s Climate Prize have all impressed the jury with their projects, and are waiting to find out who will win SEK 100,000 for their cause on 8 November, as well as a diploma and medal.

Each one would be a worthy winner of the award, organised by the Children’s Climate Foundation - an initiative from Swedish renewable energy company Telge Energei.

Celebrated Indian wildlife photographer Aishwarya Sridhar, 24, who was part of this year’s jury team said, “I was totally blown over by the ingenuity and practical application of each of the finalist’s projects.”

For the first time since the prize was founded in 2016, nominations were received from all six continents.

Hailing from Australia, Brazil, Kenya and the USA, each finalist has addressed “real problems which are plaguing the world,” said Ms Sridhar, and created impactful solutions.

“Seeing their work it also brought a sense of reassurance that with young people like them leading by example, the future is in the right hands.”

This year's winner will be announced on 8 November, followed by a digital broadcast of the awards ceremony on 19 November.

Here are the 2021 finalists and their inspiring, timely projects.

Anjali’s legal wrangling in Australia is historic. Last year she took the nation’s environment minister to court over the extension of a coal mine, formally establishing that they had a duty of care to all Australian children in light of the climate crisis.

The battle is ongoing, with an appeal hearing scheduled next month, but an important legal precedent has already been set in fossil-fuel laggard Australia. If the duty of care is upheld, any future coal mines would in theory be an act of negligence.

Anjali has been organising with student strikers for three years; her anger at how easily the government brushed aside climate protesters led her down a new avenue to hold Scott Morrisons’ team accountable. “Australia’s own law is something that not even the government can escape,” she said.

The 17-year-old’s experience with the inner workings of the law has made her realise what an “intricate, and detailed” thing it is, and how open to interpretation. She is now even more determined to work in environmental law.

In stopping the construction of a coalmine extension that would pump out over 100 million tonnes of CO2 in its lifetime - equivalent to 20 per cent of Australia’s emissions in a year - Anjali’s service to the world is already immense.

Lesein has hit upon a brilliant way to use the world’s love of football for good.

A passionate footballer himself, Lesein came up with the idea aged 12 to plant a tree for every goal he scored. The initiative he called ‘Trees for Goals’ soon caught the attention of other pupils, and his school and football club adopted it, planting nearly 1,000 trees around Nairobi.

With Kenya losing around 50,000 hectares of forest a year - the equivalent of 130 football fields a day - it was clear to Lesein that his solution needed to be upscaled. Its potential soon caught the attention of the government too; he was invited to meet the minister of environment and forestry, and later planted a tree with the president.

The Children’s Climate Prize jury said that Lesein “represents the soul of the award”, by demonstrating how to mobilise a large number of people in a simple, smart and innovative way.

Under the Trees for Goals initiative, signed-up schools and football clubs are now committing to plant 11 trees for every goal they score, including during training. It has enormous potential: in an interview in The Ecologist, Lesein said he was keen to get FIFA and famous footballers on board.

The start of Yash’s entrepreneurial journey is a sad and all-too-common one for children. At 10 years old he was being bullied at school, when he got invited to participate in a hackathon - a two-day workshop to pitch and build an idea.

Yash was inspired to create an ‘anti-bullying watch’, enabling him to express his feelings through technology. He ended up winning a prize, which spurred him on to use his tech skills to address “the biggest problem that we’re facing”: climate change.

His ‘DeepWaste’ mobile app uses artificial intelligence (AI) to accurately classify waste. As the world grapples with mountains of unsorted waste which often ends up in landfill, a more efficient system could do wonders for the environment.

“It’s not a silver bullet,” said Yash, “but technology will play a crucial role in reducing global emissions and eventually combating climate change.”

The jury agreed, praising DeepWaste for being self-teaching, accessible and easily scalable.

15-year-old Reshma is applying AI in a life-saving way. She has created a model that proactively predicts forest fires using meteorological data and other parameters.

Forest fires have been increasing in frequency and intensity over the years, directly and indirectly causing over 339,000 premature deaths worldwide.

They result in forest degradation as they wipe out trees and vegetation, cause soil erosion - leading to secondary disasters like mudslides - and destroy the habits of many species, thereby shrinking biodiversity.

“Reshma represents the best of youth entrepreneurship: brave, innovative and solution-oriented,” says the jury. “Her model uses AI and technology in an innovative and savvy way in order to accurately predict the risk of forest fires while also accounting for the independent variables of climate, weather and human behavior.”

Fernanda Barros, 16m, from Bélém, Pará, Brazil: A megaphone for justice in Amazonas

A co-founder of Fridays for Future Amazonia, Fernanda is fighting for climate and social justice in the face of a presidency actively thwarting her efforts.

Undeterred by Bolsonaro and Brazil’s powerful agricultural lobby, she is amplifying the voices of young Amazonians.

“It’s not easy to work against a headwind,” says the jury, who see “a strong-willed individual who fights for fairness under difficult circumstances that the pandemic has made even more difficult.”

They added: “The states of Amazonas, the rainforest and Brazil are topical issues in the climate debate and affect all of us. Fernanda’s work in this area is therefore not only important locally, but also globally.”