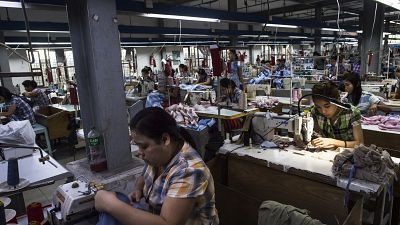 Europe is finally taking action on unsustainable fashion, but is it really meaningful?

Not according to a coalition of NGOs and natural fibre groups, who are calling on the EU to ditch oil-based synthetic fabrics from its sustainable clothing proposal.

Under the EU’s Product Environmental Footprint (PEF) scheme - which is on the cusp of coming into law seven years after it was devised - companies will be forced to label their garments with the emissions that went into making them.

But the PEF methodology has a number of loopholes, say fair fashion advocates, who launched the Make the Label Count campaign in Brussels today, 13th October.

Crucially, by accounting for the impact of forming natural fibres but not synthetic ones made from crude oil, it pushes consumers towards fossil fuel tainted outfits.

“For years we have been pushing for better labelling on fashion items. Our industry has an unacceptable impact on our planet and consumers do not want to be complicit,” says Livia Firth, Make The Label Count co-spokesperson and creative director of the Eco-Age agency.

“We stand ready to help develop a clear and credible label that reflects the latest science to empower millions of European consumers, and beyond.”

Why has the PEF scheme been branded greenwashing?

As part of the European Green Deal, the continent is shifting to a climate-neutral and circular economy.

Textiles have been rightly recognised as a sector ripe for change, where products can be made more energy-efficient, durable, reusable, repairable and recyclable.

Textiles have been rightly recognised as a sector ripe for change, where products can be made more energy-efficient, durable, reusable, repairable and recyclable.

Measuring and labelling the environmental impact of clothes is a much-needed step. But it's important that the labels tell the whole story, and the scheme doesn’t just rely on buzzwords like ‘eco’ and ‘sustainability’, which leave consumers in the dark. And allow retailers to keep producing and polluting as usual.

In its current form, the PEF methodology has 16 environmental impact categories - ranging from the ecotoxicity of freshwater to ozone depletion.

But it’s missing some impactful ideas. The European Commission started the PEF in 2013, and there’s been major advancements in research around the environmental impacts of the textile industry since, explains Dalena White, Make The Label Count co-spokesperson and secretary general of the International Wool Textile Organisation (IWTO).

“If the Commission proceeds to use the PEF without updating it, the fashion and textile industry won’t make the green transition the EU wants to see.”

Only an updated set of criteria will “achieve a clothing sustainability label that gives consumers credible information that substantiates green claims and prevents greenwashing,” she adds.

What is Make the Label Count calling for?

Groups including The Campaign for Wool, IWTO and Plastic Soup Foundation are calling for the EU’s clothing sustainability labels to be tightened up before they’re introduced.

That means including information on an item’s renewability, biodegradability, recyclability, and its use of fossil fuels and materials which shed microplastics - all of which are currently lacking.

Laundering synthetic clothes accounts for 35 per cent of primary microplastics released into the environment, says Make the Label Count. And with 60 per cent of textile fibres synthetic there’s a clear case for promoting natural fibres.

To this end, the benefits of natural fibres (like wool and linen) need to be better reflected - with the PEF properly accounting for their good biodegradability, for example.

The socio-economic impact of fibre production should be factored in too: growing natural fibres provides an income for rural, remote and poor communities globally.

“When people make informed choices, they make better choices – and this in turn will encourage brands to make products with the lowest possible environmental impact,” says Firth.

Meet the photographers capturing the frontlines of the climate crisis