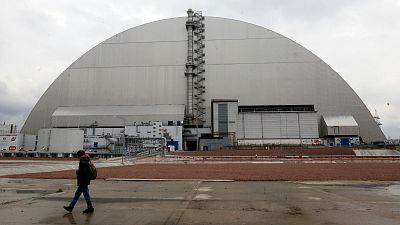 A man walks past a shelter covering the exploded reactor at the Chernobyl nuclear plant, in Chernobyl, Ukraine, Thursday, April 15, 2021.   -   Copyright  Efrem Lukatsky/Copyright 2021 The Associated Press. All rights reserved
By Rosie Frost  •  Updated: 24/03/2022

The world needs to come to an agreement on how to maintain nuclear facilities in Ukraine, the International Atomic Energy Agency has said.

Without it, there is an increased risk of a severe accident that could threaten both people and the environment in Ukraine and beyond.

“I remain gravely concerned about the safety and security of the nuclear facilities in Ukraine,” IAEA director-general Rafael Mariano Grossi said in a video statement.

“We cannot afford to lose any more time. We need to act now.”

The need to prevent a nuclear accident becomes more pressing with each day that passes.

Grossi has personally expressed his readiness to go to Ukraine and finalise an agreement that would allow experts and equipment to be sent in to maintain the nuclear facilities.

However, a “positive outcome still eludes us” the director-general explained, adding that “the need to prevent a nuclear accident becomes more pressing with each day that passes.”

“This assistance is essential to help avert the real risk of a severe nuclear accident that could threaten public health and the environment in Ukraine and beyond.”

What is happening at Ukraine’s nuclear plants?

Russian forces have taken two Ukrainian nuclear facilities in the last month: Chernobyl, the site of the world’s worst nuclear meltdown, and Zaporizhzhia, the largest plant of its kind in Europe.

Around 100 staff at Chernobyl nuclear plant were reportedly "held hostage" for three weeks. Relatives and colleagues told AFP that they were “physically and morally exhausted.”

The IAEA had previously stated it was concerned about their welfare, but this week half of the workers were finally able to return home for the first time since 23 February.

There was also concern about power lines to the plant which had been disconnected impacting its safety. However, Chernobyl was successfully reconnected to Ukraine’s national grid last week.

Ukraine’s nuclear agency also announced that a laboratory which deals with nuclear waste had been destroyed by Russian bombs. Built in 2015, it contained “highly active samples and samples of radionuclides that are now in the hands of the enemy, which we hope will harm itself and not the civilized world.”

According to the agency, radiation monitors around the site have also stopped working.