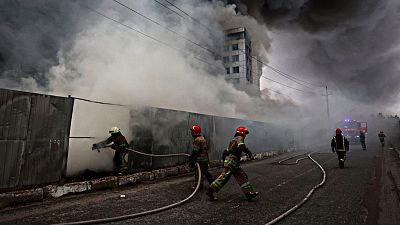 Europe's biggest nuclear power station has been targeted in a fire in southeast Ukraine.

But authorities say the huge blaze was extinguished on Friday. The plant is reportedly operating normally, despite being seized by Russian forces in heavy fighting that caused global alarm.

The fire at the Zaporizhzhia compound was in a training centre and not at the plant itself. An official at Energoatom, the state enterprise that runs Ukraine's four nuclear plants, said there was no further fighting, the fire was out, radiation was normal and Russian forces were in control.

“Personnel are on their working places providing normal operation of the station,” the official told Reuters in a message.

Russia's defence ministry blames the fire on a "monstrous attack" by Ukrainian saboteurs.

However he said his organisation no longer had communication with the plant's managers, control over the radiation situation there or oversight of potentially dangerous nuclear material in its six reactors and about 150 containers of spent fuel.

Russia's defence ministry has also stated that the plant is working normally. It blamed the fire on a "monstrous attack" by Ukrainian saboteurs and said its forces were in control.

Could this cause a nuclear disaster?

Nuclear energy is a renewable source of power and evidence over six decades shows that it is a safe means of generating electricity. The risk of accidents in nuclear power plants is low and declining.

But the prospect that fighting at the Zaporizhzhia plant could cause a potential nuclear disaster has set world financial markets tumbling.

Even with that scenario seemingly averted, Russia's grip on a plant that provides more than a fifth of Ukraine's electricity was a big development after eight days of war in which other Russian advances have been stalled by fierce resistance.

US Energy Secretary Jennifer Granholm and other Western officials said there was no indication of elevated radiation levels at the plant.

Earlier, a video from the plant verified by Reuters showed one building aflame, and a volley of incoming shells, before a large incandescent ball lit up the sky, exploding beside a car park and sending smoke billowing across the compound.

"Europeans, please wake up. Tell your politicians – Russian troops are shooting at a nuclear power plant in Ukraine," Ukrainian leader Volodymyr Zelenskiy said in a video address. In another address later he called on Russians to protest.

He also called on Russians to protests over the attack.

Europeans, please wake up. Tell your politicians – Russian troops are shooting at a nuclear power plant in Ukraine.

The mayor of the nearby town of Energodar, about 550 km southeast of Kyiv, said fierce fighting and "continuous enemy shelling" had caused casualties in the area, without providing details.

Thousands of people are believed to have been killed or wounded and more than 1 million refugees have fled Ukraine since 24 February, when Russian President Vladimir Putin launched the biggest attack on a European state since World War II.

Russian forces advancing from three directions have besieged Ukrainian cities and pounded them with artillery and air strikes. Moscow says its aim is to disarm its neighbour and capture leaders - it calls neo-Nazis. Ukraine and its Western allies say it is a baseless pretext for a war to conquer the country of 44 million people.

Russia had already captured the defunct Chernobyl plant north of Kyiv, which spewed radioactive waste over much of Europe when it melted down in 1986. The Zaporizhzhia plant is a different and safer type.

'I had to run from my country': Distraught Ukrainians arrive in Poland

The EU has been sleepwalking into war. Germany and France led it here