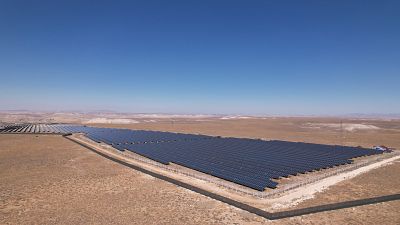 Approximately half of Turkey’s coal mines are suitable for conversion into solar farms, according to a new report.

The energy generated would boost the country’s solar capacity by 170 per cent and, crucially, produce enough electricity to power 6.9 million homes.

The research by campaign group Europe Beyond Coal shows that open-cast coal mines in Turkey have caused tremendous damage to both the climate and human health. Currently, a quarter of Turkey's total greenhouse gas emissions originate from coal, leading to premature deaths.

Coal is considered to be the dirtiest fossil fuel. It is responsible for over 0.3C of the 1C increase in global average temperatures. This makes it the single largest source of global temperature rise.

But if Turkey’s mines are turned into solar farms, the newly improved sites could play a key role in the green energy transition.

As countries across Europe look for ways to rapidly scale up renewable energy capacity due to Russia’s invasion of Ukraine and surging fossil fuel prices, the report suggests that part of the solution is hiding in plain sight.

“In a fortuitous arc of history, the mines that have provided the coal which has so damaged our climate and communities can play a vital role in decarbonising our energy systems, and tackling the climate crisis,” said Duygu Kutluay, a campaigner for Europe Beyond Coal.

"Turkey has recently upped its climate ambitions by ratifying the Paris Agreement, and setting a net zero goal. The sooner we start delivering on these targets, the greater the benefits will be for our health and our economy, which was hit hard by last year’s climate change-induced wildfires.”

Harnessing solar energy from Turkey’s mines would cut its annual CO2 emissions by an equivalent amount of around 50 million passengers taking a flight from Istanbul to Rome.

The study confirms that countries with large open-cast coal mines should be viewing them as “renewable energy transition assets”, Kutluay adds.

Why are coal mines suitable for conversion into solar farms?

Coal mines have a cost advantage over virgin plots of land as they come ready equipped with much of the necessary infrastructure required to host solar installations.

“When you kit them out with advanced battery storage systems, they’re able to consistently deliver a base load of cheap, clean, fossil-free energy. We really should be capitalising on them,” says Bahadır Turhan, Chairman of the board at Solar3GW.

“We’d also be helping ward off the worst impacts of the climate crisis, such as wildfires and floods,” adds Onur Akgül from Greenpeace Mediterranean.

Transforming these coal mines would produce 19 billion kilowatt hours of fossil-free electricity. That’s equivalent to a third of the electricity Turkey produced from hard coal and imported coal in 2021.

“Turkey is a sleeping solar giant! We really need to wake up to this potential, ” concludes Barış Eceçelik, co-author of the report and board member at Ekosfer Association.