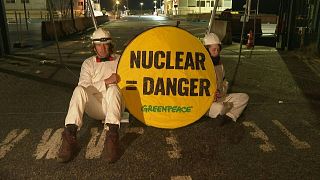 Greenpeace activists break into the construction site of the Flamanville EPR nuclear reactor to protest against pro-nuclear candidates in the French presidential elections.

Launched at the end of 2007, the Normandy project is 11 years overdue and its cost has risen to 12.7 billion euros according to EDF, compared with the 3.3 billion announced in 2006.

Greenpeace France has called for an independent assessment of the viability of EPR nuclear reactors.