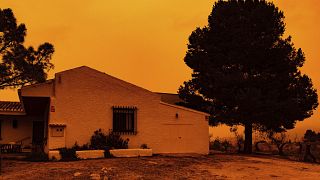 An orange sky is seen over a building in Navares, south eastern Spain on Monday.   -   Copyright  Javier Carrion/AP
By Euronews Green  with APTN  •  Updated: 16/03/2022

Spain issued extremely poor air quality ratings for Madrid and a large swath of the country Tuesday after a mass of hot air from the Sahara dumped dust after crossing the Mediterranean.

Many Spaniards awoke to find a layer of red dust covering terraces, streets and cars. The sky in the capital and other cities was tinged orange with visibility as low as 4km.

These clouds of Saharan dust happen every year when hot wind blows across loose soils on dry lands. Last year, a massive plume the size of the United States named "Godzilla" carried tonnes of tiny particles across the Atlantic Ocean.

Emergency authorities in Spain have recommended citizens use face masks if they go outside, and avoid outdoor exercise.

The wave of hot air has also affected the air quality in areas north of Madrid, as far west as in the Canary Islands in the Atlantic Ocean and in the Balearic Islands in the Mediterranean.

On Tuesday, the Climatology Laboratory at the University of Alicante said that Spain had the most unfavourable air quality anywhere in the world, surpassing both India and China.

The mass of hot air from Africa, however, delivered much-needed rain to a region that has been recently been hit by drought. In the last three months of 2021, Spain recorded just 35 per cent of its average rainfall and there had been almost no rain since then.

Previously flooded villages emerged from the bottom of reservoirs and farmers across the Iberian Peninsula were worried that crops could fail. While periods of drought are common in the region, experts say that climate change has exacerbated the problem in what is usually the wet season.

When the rainwater combines with the desert dust, it creates a phenomenon known as 'blood rain' leaving a muddy residue everywhere that it falls.

Watch the video above to see how the dust is covering the country.